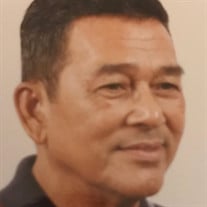 Alfredo Cuadra Cruz Jr. (a.k.a Fred), 82 years of age of Port Orchard, WA, died last June 10, 2019. He was born on January 29, 1937 in Binan, Laguna, Philippines and son of Alfredo Silva Cruz & Araceli Cuadra Cruz. He was married to Rosa Capistrano Concepcion, on January 15, 1955 also in Binan, Laguna. Fred is a very loving son, husband, father and grandfather. He lives in the Philippines most of his life. Alfredo and his wife Rosa was petitioned by their daughter Rosalina on January 1999 and became a US Citizen on November 17, 2004. He is a very kind, patient and industrious person. When he was in the Philippines he used to work as a carpenter, plumber and a jeepney driver. In other words, he is a jack of all trades. Surviving are daughter Rosalina Cruz Nunez of Port Orchard; son Eldifonso Concepcion Cruz of Manila, Philippines, and sisters Adoracion Cruz Antonio & Anita Cruz Nepomuceno of Canada; 8 grandchildren (Ramil, Mark & Arvy Verzosa, Shaun & Kelvin Nunez, Hans, Sean & Lance Cruz) and 8 great-grandchildren. Visitation or viewing will be on June 21, 2019 from 6:00 to 9:00 pm at Rill’s Life Tribute Center in Port Orchard. Then Funeral Mass will be on Saturday, June 22, 2019 at 2:00 pm to be held at St. Gabriel Catholic Church in Port Orchard.

The family of Alfredo Cuadra Cruz Jr. created this Life Tributes page to make it easy to share your memories.