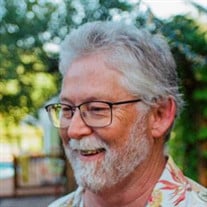 Allen Meader September 2, 1957 — April 1, 2020 On Wednesday, April 1st, 2020, Allen Lee Meader, loving husband, beloved father, brother, and friend passed away at the age of 62. Al was born on September 2nd, 1957, in Moses Lake Washington, to Barbara and Howard Meader. He had two brothers, Terry and Les, and a sister, Bobbie . Graduating from Eastmont High School in East Wenatchee in 1976, he then attended Spokane Community College and graduated with a degree in Civil Engineering. After college, he found work detailing steel rebar for buildings and bridges in the city of Spokane. One evening in February 1980, Al was playing pool at a local bar with his friend Miles when in walked the woman who would change his life forever. Miles introduced Al to his sister Melissa, and they hit it off right away. A little more than a year later, on May 9th, 1981, under a hundred year old maple tree in the Spokane Arboretum, Al and Melissa were married. They lived in Cheney for a time, and spent the next 5 years renovating an old house that probably should have been condemned, but they were young, stupid, and in love. In 1986, Al’s career took them to Seattle, where Al would take a job at Seattle Steel. In 1987 their lives changed once more when their first son, Alex, was born, and then again in 1990 when Al left Seattle Steel and started a job as a machine designer for an upstart ski company called K2 Sports. He would go on to work for K2 for the next 30 years, making a huge impact on the company and everyone he worked with. In 1992 Al and Melissa’s life changed yet again with the birth of their second son, Scott. It would change yet again in 1995 with the birth of their daughter Hannah. You can’t really sum up someone’s life with words alone, but if I had to choose words to describe Al, they would be loving and endlessly curious. With a generous heart and a lifelong passion for building things, Al rarely stood still. Whether he was designing a new machine for work, building a coaster car with Scott and Alex, remodeling a house, or building a zipline in the backyard, Al brought a sense of passion to everything he did and loved finding creative solutions to problems. His mind was constantly swirling with new ideas of how to improve things and that flowed into every aspect of his life. Al’s life was marked by his love of Jesus, and he shared that love with everyone he met. From helping build youth centers for the local church and community in Unalakleet Alaska, to assisting with several building and remodeling projects for Youth With A Mission at Discovery Bay, and helping countless friends and relatives with building and remodeling projects over the years, giving his time and skills to others was one of the things that brought Al the most joy in life. One of Al’s other great joys in life was engineering. In his time at K2 Sports, his passion would touch the lives of countless people and leave a legacy of innovation, leadership, and camaraderie with his co-workers. His love of engineering would lead him to hold multiple patents for his machine designs and to become an instrumental part of the growth and advancement of K2 in the years that he worked there. Al loved motorcycles. He started riding in his teens and continued to ride for the rest of his life. You could always tell when he got home from work by the purr of his BMW rolling into the driveway. Even more than he loved motorcycles, Al loved spending an evening around a warm fire with family and friends. Whether it was a campfire out in the wilderness or a backyard bonfire, he was always there with his trusty fire stick keeping the flame bright and strong. He understood the deep sense of togetherness that a crackling fire can create, and the importance of keeping a light shining in the darkness. And what’s a fire without a good beer? He loved trying new beers and over the years he became quite the brewmaster himself. He was constantly experimenting with new dunkels and ales, working to create the perfect beer and he loved to share them with anyone and everyone. Above all else, Al was a husband and a father. Through thick and thin, he was a man who dearly loved his wife and family. Throughout their 38 years of marriage and the laughter, grief, and joy that came with it, Al and Melissa’s love for each other burned brightly, a beacon of strength and hope to all who knew them. They shared that same love with their children too. Al was the best Dad a kid could ever ask for. He loved to share his deep sense of wonder for the beauty and mystery of the universe with his children and, oftentimes, dinnertime conversations turned into hours of discussion about quantum physics, black holes, and the nature of the universe. Some of his children’s most cherished memories were the nights they spent together staring up at the stars in awe at the incredible vastness of the universe. Al was preceded in death by his brother Terry, his father Howard, his stepfather Jack, and his mother Barbara. He is survived by his wife Melissa, his three children, Alex, Scott, and Hannah, his sister Bobbie, and brother Les. Al always used to say “life’s an adventure.” Those words really define the kind of life that he lived. A life of seized opportunities, a life lived in the moment, a life full of love, compassion, silliness, adventures, family, good beer, and good laughs. He was a man with a lust for life, compassion for others, and a hopeful spirit. He will be dearly missed. In lieu of flowers, memorials can be made to the Creutzfeldt-Jakob Disease Foundation at CJDFoundation.org.

The family of Allen Meader created this Life Tributes page to make it easy to share your memories.