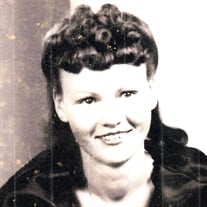 Alpheratta (Al) Dixon was a loving, creative, resilient and resourceful woman. She was generous and compassionate to those down on their luck. She would not think twice about giving money to someone in need. She wasn't one to make herself the center of attention (although she was known to make a scene from time to time). She rather enjoyed intimate settings where she could talk with people one on one. She loved to crochet and sew and would easily burn the midnight oil with one of her 12 sewing machines. She made the Best fried chicken you have ever eaten, but only when she had Dixie Fry on hand. Wife to Gene. Mother to six- Mary Gene, Dena, Roberta, Marietta, Steve and Wanda. Grandmother to 22. Great-Grandmother to 46. Great-Great Grandmother to 15. (yes we have a VERY large family) We are her legacy. We are the ones to relive her memories. We are the ones to retell her stories. We are the ones to reflect on her life. We relive the memories of how she grew up during the depression. It was here that she learned to be resourceful. It's why she always said "NEVER throw anything away you might need that one day". It was why she would stash money and hide change in the strangest of places, including the back of her mother's refrigerator. and in all sorts of bottles, because everyone needs a dime jar or two. It is why she told us to never throw away the scraps of fabric. We relive her memories of spending time with her father on his commercial fishing boat. Memories of her and her 3 brothers eating the forbidden persimmons and being so puckered up they got caught, and memories of the goats they kept and how good the milk was. We retell her stories of being a riveter to support the war efforts of world war II. Of how she worked in the garment factory alongside her mother with her first-born daughter Mary Gene in a bassinet between them. It was in the garment factory that she developed her amazing skills as a seamstress. A skill that her family would enjoy throughout the years as she made us baby doll and Barbie doll clothes, baby blankets and baby clothes, prom dresses, and wedding dresses. We retell how she met her husband, Gene, at a New Years Eve party where he was dressed up like baby New Year and he only had on a diaper. Of how she made chocolate cakes and homemade soups but when Gene came home from being deployed, out came the steaks. We retell how she took a sledgehammer to a wall to remodel the house, of how she ran over a huge snake in the road and made the kids get out and look for it, and of taking the cruise ship from Hawaii back to the states because she hated flying. We retell the stories of how her and Gene went on a nationwide motorcycle excursion. How they went up thru Canada and across the United States on a Harley and its sidecar. Gene on the hog and Al with the dog in the sidecar. And the story of her riding a boat to Victoria B.C. with one of her daughters and granddaughters and how a man asked her to marry him. Sorry, mister- she was already taken. We are the ones to reflect on her life. We reflect on her love for her parents and how much she enjoyed traveling to California to see them. We reflect on how she persevered as a Navy wife for nearly two decades, on how she raised her children while her husband served in Vietnam, and on how she survived breast cancer in the 70's. We reflect on how she loved the ocean, and seafood, and See's candy. We reflect on how she would tinker with things trying to figure out how to fix them. How she would say, "I won't make any promises but I will do the best I can." "You could change that outfit by adding a belt to it or even some lace." And at the end of day, we reflect on how she would say, "it's not good-by but see you later."

Alpheratta (Al) Dixon was a loving, creative, resilient and resourceful woman. She was generous and compassionate to those down on their luck. She would not think twice about giving money to someone in need. She wasn't one to make herself the... View Obituary & Service Information

The family of Alpheratta Mary Dixon created this Life Tributes page to make it easy to share your memories.

Alpheratta (Al) Dixon was a loving, creative, resilient and resourceful...