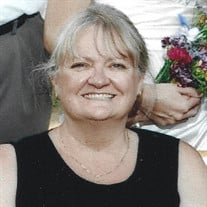 Andrea Hart Henderson was born on November 29th, 1952 in Richmond, CA and moved to Union City, CA in first grade. She gradated from James Logan High School in 1970 and attended Chabot Jr. College for dental assisting. Andy was active in the dental community and served as president of the Washington State Dental Assistant’s Association. She worked as a dental assistant and office manager, retiring around 2012. She was also a member of Harper Church, always ready to serve anyone in need of anything. She worked tirelessly to help feed, clothe, and comfort anyone who was having a hard time. Andy was also a lifelong girl scout. She was great at sewing and gardening, and enjoyed hiking in the mountains and Desolation wilderness, traveling with friends, kayaking, skiing, and photography. Her biggest accomplishment was being a wonderful grandmother. She enjoyed being anywhere and doing anything with her grandkids. Andy made early childhood fun for her kids and grandkids with creative birthday parties and fun outings. Phil enjoyed touring the western states on an old Harley with her. She enjoyed cooking for her family, family reunions, taking her grandkids to the park and zoo. She dreamed of taking them to Disneyland. Andy was predeced in death by her parents, Richard Hart and Eva Kinney and their spouses. She was also preceded in death by Ellie and Sage Mahoney and Joyce Henderson. Andy is survived by her loving husband Phil Henderson, her daughter Lillie Miller and son-in-law Yontz, her daughter Amanda Mahoney and son-in-law Kevin, her sisters Diane Bennett and Marsha Hart, her brother-in-law Steve Henderson, her nephews Shawn Davis, Rob Henderson and Mike Henderson, her niece Marissa Hart, and her grandchildren Eli, Nolan, Indie and Kellen, as well as many extended family members and wonderful friends. Andy is forever remembered and loved, especially when passing by an iris or listening to the song “Tainted Love”.

Andrea Hart Henderson was born on November 29th, 1952 in Richmond, CA and moved to Union City, CA in first grade. She gradated from James Logan High School in 1970 and attended Chabot Jr. College for dental assisting. Andy was active in the... View Obituary & Service Information

The family of Andrea Hart Henderson created this Life Tributes page to make it easy to share your memories.