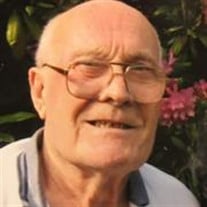 Andrew Loch, 92, of Port Orchard, went to be with his Lord and Savior, June 11, 2018. Andrew was born June 6, 1926 in Bemidji, Minnesota, the son of Peter Loch and Katherine Smitch. He married Colette Loch, June 26, 1963 in Port Orchard. They are the parents of six children, Thomas Andrew (Geni) Loch of Tacoma, Peter David (Pam Martin) Loch of Port Orchard, Donna Vivian Doolittle Loch of Port Orchard, Teresa Marie (Jeff) Duke of Port Orchard, Michael Andrew Loch of Belfair, and Jeremy Joseph (Lisa) Loch of Port Orchard. He is survived by 15 grandchildren and 13 great grandchildren. He was preceded in death by his parents, His wife, Colette Loch, son Peter Loch and Brothers Al, Isador, Jim, and Frank, and Sisters Rose, Mary, and Elvina. Andrew was a member of St. Gabriel Catholic Church of Port Orchard After he and his wife were married, they moved into the house that Andrew built for them in Port Orchard, where they raised six children, and where he lived the rest of his life. He was a devoted husband and father. Through his career he was self-employed as a carpenter, and worked at Jackson Park in the maintenance department, which he loved doing and where he retired in 1996. Andrew loved working with his hands, loved the Mariners, and was a character with a sharp sense of humor.

The family of Andrew Loch created this Life Tributes page to make it easy to share your memories.