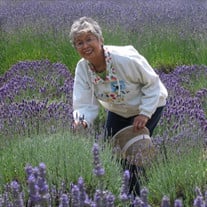 Early in the morning of March 24, 2022 - before sunrise and before the birds started chirping, Anna Oshiro passed away at home in Port Orchard, WA. She was with family and was lovingly dressed by her granddaughters before she left home for... View Obituary & Service Information

The family of Anna Nabarrete Ebat Oshiro created this Life Tributes page to make it easy to share your memories.