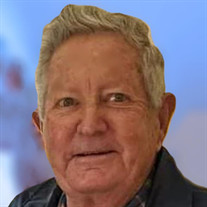 Asa Lee “Sonny” Norwood of Port Orchard (Pronounced: AY-sah. Meaning doctor, healer) Born: January 21, 1935. Asa was born in Winnsboro Louisiana at his family’s residence during a snowstorm. He attended school in Winnsboro and during High School participated in FFA (Future Farmers of America) and played the clarinet in the school band. He attended Louisiana State University on a band scholarship. He was very active in 4-H club and won many Awards; with the best being “a trip to the National 4-H Congress.” Asa, Harriet, and their daughter (Melinda Faye Norwood) all attended the national 4-H club Congress in Chicago during their senior years in 4-H. He joined the Navy in 1954 and after boot camp in California and electrician mates schooling reported aboard the USS Kearsarge CVA-33. His last year in the navy was aboard a yard tugboat at Charleston South Carolina. While stationed in Bremerton for the ship's overhaul Asa attended the Kitsap County Fair to view the 4-H club members exhibits and by chance met the lady of his life, Harriet Louise Root, who also was a senior 4-H member. They met on August 23rd, 1956, married on August 23rd, 1959, and celebrated 58 years of marriage. They had two daughters: Jeannie Marie Norwood and Melinda Faye Norwood. After Asa was discharged from the Navy, he worked for Boeing airplane company in Renton Washington. Asa left Boeing to accept an apprenticeship at Puget Sound Naval Shipyard as a sheet metal worker. He completed his apprenticeship just before having open heart surgery in 1962 (before the heart-lung machine was available). Asa was a sheet metal mechanic, sheet metal layer-out, shop planner (nuclear INSP), ships progress man, and sheet metal planner and estimator, as-well-as being loaned to two different design codes, before retiring. 35.5 years later he retired from PSNS. Asa worked for 12.5 more years for private contractors traveling all over the world to work on US Navy ships of all types. Asa was a quiet and faithful father and enjoyed his homesite with its fishpond, pasture, and a view of Mount Rainier. He enjoyed many trips with his family and with his work. He encouraged and supported his families many communities’ improvement projects over the years. His family was honored as the States 1982 Arbor Day Winner by Governor John Spellman. He experienced a second open heart surgery on December 28th, 2012, an operation that Doctors don't usually see but 1 in 10 years. They discovered he had never had a pulmonary vein from the heart to his lungs. His recovery was awesome. Asa is survived by his daughter Melinda Faye Cole and husband Steven D. Cole: three granddaughters Kayla, Evona, and Emily Cole. He was preceded in death by his wife Harriet, daughter Jeannie Marie Norwood, grandson Kyle Cole, and his only sibling Lilly Marie Norwood-Yates. Close friends and family members are invited on April 29th, 2022 at 11:00 AM to a Celebration of Life at the residence of Steve and Faye Cole. Brunch is provided to all who attend. Please bring a rememberable story to share. Following the brunch there will be a military Graveside Service at Sunset Lanes Memorial Park at 3:00 PM, where they will lay to rest both Asa and Harriet’s ashes.

The family of Asa Lee Norwood created this Life Tributes page to make it easy to share your memories.