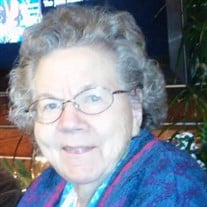 Ava L. Martens (Houston) Vaughan July 2, 1924 – February 7, 2021 Our sweet Mother, Grandmother, Sister, Aunt and friend has gone to Heaven. Ava was born to Henry and Amelia Martens on July 2, 1924 in Faith, South Dakota. She joined a family of siblings including her brothers Louis, Earl, Les and Leo, as well as her sister, Florence. Her younger sister, Henrietta, followed. Faith was home to Ava throughout her childhood. Her eldest brother Louis and his family moved to Washington, and the rest of the Martens family were not far behind. They settled on Pottery Avenue in Port Orchard in 1940. Ava was married to James Ray Houston in 1943 and moved to Lyle, WA, where her sons “Bobby” and “Jimmy” were born. In 1946, Ava and the boys moved back to Port Orchard, where she lived and worked as a single mother. Many people remember her from her years of work at Dr. Gullo’s office. She met Don Vaughan in 1949 and they began a life-long courtship. Anyone who knew them, knew they adored one another. In July of 1976, Don and Ava were married and settled at their place on Long Lake. Ava was an avid gardener. She loved her plants! Her baking skills were also well known, although she rarely looked at a recipe. Their home was full of the sounds of Ava playing hymns on the piano or whistling as she walked down the hall. She was rarely seen without a smile and always generous with her affection. As her health declined, Ava was moved to Life Care Center in Port Orchard, where Don visited her daily, until Covid rules prevented it. She was preceded in death by her parents and elder siblings. She is survived by her husband Don, sons Robert (Louella) Houston and James (Maria) Houston, 5 grandchildren, 11 great-grandchildren, 7 great-great grandchildren, as well as her sister, Henrietta. A memorial will be held to celebrate her long life – Friday, March 19th 1:30 p.m.

The family of Ava L. Vaughan created this Life Tributes page to make it easy to share your memories.