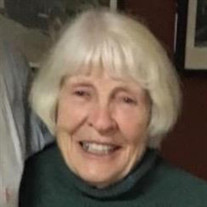 On March 2, 2020, in Bremerton, Washington with her loving family by her side, Barbara Lyle Brose (Grandma, Mom, Auntie Barb, Auntie Bob, Bobbi) went home to be with Jesus in His everlasting arms. Barbara was born on April 25th, 1931 at home on the farm in Florence, Oregon to Kenneth and Rosa Phillips. She had many fond memories of her growing up years on the family’s dairy farm next to the North Fork of the Siuslaw River with her three sisters and girl cousins. Barbara attended schools in Florence where she graduated from Siuslaw High School in 1948 with honors. There she enjoyed friends, cheerleading, and other school activities. Barbara was raised with a strong work ethic and began working in her teens for a doctor and his family, at a hospital, at a soda fountain, at a retail boutique and also as a ticket taker at the local theater. After high school, she and a girlfriend, Monte Kimball, moved to San Pedro, California, where she worked as an operator for the phone company. There they rented an apartment from her namesake, Uncle Lyle. She enjoyed her time in California and saved enough money to purchase a 1953 Oldsmobile car before returning home to Florence, Oregon. Later in her 20’s, Barbara was introduced to the love of her life, Theodore (Ted) Edward Brose, in Florence, Oregon where he was working picking evergreens for floral arranging. After a short courtship, they were married on September 26, 1959 in Port Orchard, Washington and spent 53 wonderful years together. Soon after marriage they started their family, having three children Michelle, Ted, and Brigitte. The family was their life, this meant being involved and traveling to many games, events, and functions that the kids were participating in. This love of family continued on with the grandchildren and great grandchildren that both Barbara and Ted unconditionally and perfectly adored. She was her grandkids biggest fan and cheerleader and traveled around the country to watch them play sports, most recently watching her youngest granddaughter Mikaela playing soccer while attending Seattle University. Barbara would say that her family was without a doubt her greatest accomplishment. Ted and Barbara worked in the floral greens industry until they started Brose’s Wholesale Florist in 1970. There they worked side by side, day in and day out. Ted handled the greens, flowers, and supplies and Barbara was the bookkeeper. Because they owned their business, they were able to take the time as needed to spend it with their family. Barbara had a passion for life and that included traveling all over the world. She always came home excited with many stories to tell about the wonderful and interesting people, places, animals, vegetation, scenery, and food that she would encounter and enjoy on her travels. Barbara and Ted would take their children, grandchildren, and great grandchildren on many exciting, fun-filled vacations with them. There are many experiences and stories that have been etched in the memories of the entire family. In their golden years, Ted and Barbara bought a home in Gold Canyon, Arizona that they would snowbird in during the winter months after the holidays would pass. While Barbara enjoyed the warm days, uniqueness of Arizona and the company of friends and family when they would visit, she always looked forward to coming home to Port Orchard, Washington. Barbara is survived by her daughter, Michelle Morey (Mitchel Morey, Sr.) and their children: Mitchel Morey, Jr. (Shannon) Isabella, Jimmy, Grace, Maguire and Harper; Mathew Morey (Emily) and Stella; Megan Mason (Antonio) Makai and Amari; Monique Morey; and Mikaela Morey. Her son Theodore Brose (Fin) and their children: Theodore Brose Jr. (Molly) Theodore and Brenley; Johnny Brose; Jason Gibbons; Vernon Brose (Ashley); Bryce Brose; Harmon Brose. Her granddaughters Stephanie Valdez and Jacquelyn Valdez. She is also survived by her sisters Dawna Large and Marie Elnan, cousins, numerous nieces and nephews. Barbara is preceded in death by her husband Ted, daughter Brigitte Valdez, sister Beverly Shuck. Her celebration of life will be held at Rill’s Life Tribute Center in Port Orchard, Washington on March 11, 2020 at 11am with a luncheon and graveside services to follow.

On March 2, 2020, in Bremerton, Washington with her loving family by her side, Barbara Lyle Brose (Grandma, Mom, Auntie Barb, Auntie Bob, Bobbi) went home to be with Jesus in His everlasting arms. Barbara was born on April 25th, 1931 at home... View Obituary & Service Information

The family of Barbara Brose created this Life Tributes page to make it easy to share your memories.