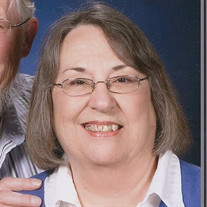 Barbara Jo Masten was born in Tacoma, to Gene and Dorothy Masten on February 9th, 1944. She was second of three children; older brother Bob and younger brother Gene (Butch). She attended Stadium High School. Shortly after graduation, she met and married Delmer Griffey. The two were inseparable for over 57 years and became active members of their community; volunteering for the Mason County Historical Society and the Fire District as well as many other worth while undertakings. Barbara loved her three children; Dennis, Daniel and Jennifer. She was a devoted grandmother and great grandmother. They all meant the world to her. Barb Griffey never shied away from an adventure. She was an amazing cook and accomplished knitter and seamstress as well. Never shying away from a challenge, Barb was a volunteer firefighter in the late 60’s and early 70’s. Both Barb and Del drove school buses for the North Mason School District. She then went on to work for the Washington State Dept. of Transportation, beginning of the road crew and retiring as a Project Engineer. Barb and Del enjoyed their family time, trips to Hawaii and remodeling their home after retirement. Barbara Jo Griffey entered heaven on January 21, 2020. She rejoined her father, best friend Rita, and favorite cats Harry & Bob. She will be missed dearly by her mother, Dorothy, brothers Bob (Carol) and Butch (Bonnie), children Dennis (Cyndi), Daniel (Dinah) and Jenni (Steve), grandchildren Alyssa, Dane, Megan, Jeremy, Sarah, David, & Chad, great grandchildren, her extended family and many friends.

The family of Barbara Jo Griffey created this Life Tributes page to make it easy to share your memories.

Barbara Jo Masten was born in Tacoma, to Gene and Dorothy
Masten...