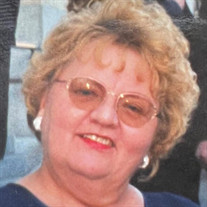 Barbara Jeanne (Muse) Paskett, age 81, of Port Orchard, Washington passed away on Thursday, April 21, 2022 at her home. Barbara was born on October 2, 1940 in Tacoma, Washington. She grew up in Tacoma and graduated from Stadium High School in 1959. She went on to work for the City of Tacoma as a bookkeeper. Barbara was preceded in death by her parents Howard Muse and Jeanne (Allen) Muse, and her brothers Tim Muse and Howie Muse. Barbara married Kenneth Paskett on June 29, 1963. They purchased their first home in Tacoma on Heatherwood Circle. They became parents in 1965 and raised 4 sons. Barbara loved being a wife, mom and grandmother. She loved spending time with her family. One of her favorite things was when a regular Saturday night dinner would end with a late night of playing cards. She enjoyed summers at Horseshoe Lake; swimming, picnicking and time with her family. Barbara also enjoyed traveling. Some of her favorite times were trips to Wapato Point, the Oregon coast, the annual McKessen trips, and camping with family and friends. She also enjoyed spending time at Lake St. Clair and Lake Cushman. Barbara participated in several activities. She was part of a Traveling Tap Dancing Troupe. She played tennis and belonged to a bowling league for many years. Her hobbies included painting ceramics, gardening, cooking and baking. She was an avid reader of fiction novels. She holds the record for the Most Books Read at Lake Chelan Library. Barbara is survived by her husband Ken; sons Greg (Anne), Jeff (Sarah), Danny, Kevin (Tracie); sisters Cheri, Bobby, Michelle; brother Wayne; grandchildren Cameron, Joshua, Elena, Emma, Evan, Aidan, Levi, Elliot, Greta, Ryan and Madeline.

Barbara Jeanne (Muse) Paskett, age 81, of Port Orchard, Washington passed away on Thursday, April 21, 2022 at her home. Barbara was born on October 2, 1940 in Tacoma, Washington. She grew up in Tacoma and graduated from Stadium High School... View Obituary & Service Information

The family of Barbara Jeanne Paskett created this Life Tributes page to make it easy to share your memories.