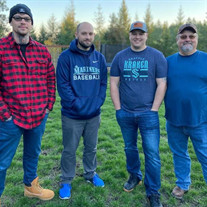 Barry Monroe Tester Age 55 1965-2021 Barry Monroe Tester, beloved Son, Brother, Husband, Father, Grandfather and Friend, passed away on August 1st, 2021. He was born on November 28th, 1965 in North Little Rock, Arkansas to his parents Troy and Charlotte Tester. Barry moved to Washington while in grade school and lived most of his childhood in Port Orchard. He graduated from South Kitsap High School in 1984 where he played football, was involved with FFA, and Auto Shop. Barry was only 16 years old when he started as a volunteer firefighter in South Kitsap where he became one of the youngest to learn how to drive a fire truck. In 1984, he joined the US Marine Corps and served 3 years in Camp Lejeune, NC. He was a AC/R Mechanic, and served his 4th year in Okinawa, Japan. Upon returning to Port Orchard, he worked for PSNS from 1988-1991, and also worked in construction as an Equipment Operator and Project Superintendent. In 1998, Barry and his family moved back to Clinton, AR. There, he worked as the Lead Field Mechanic for Arkansas Electric Co-op. In 2006, Barry and his family moved back to Port Orchard, WA where he worked as a Project Superintendent until 2011 when he joined NAVFAC, where he became an Engineering Technician. Barry has always had a passion for football, and a love for teaching, so becoming a coach came natural to him. From 1988-1998 he coached for South Kitsap Pee Wees. In 1999, he started the Clinton Pee Wee Football Association, where he touched the lives of many children. He was a passionate and caring coach. Barry sponsored many kids in sports where he taught them teamwork, leadership, and a sense of belonging. In his 17 years of coaching, he won 9 championships, and had multiple playoff appearances. On August 14th, 2015 Barry married his wife, Michelle. He loved spending most of his time with her doing projects in the yard, going to Dairy Queen, camping, fishing, and spending time with family. Barry is survived by his three sons in which he loved going on fishing charters with. He was most proud of his boys and shared his admiration for them with everyone he met. Barry was the best grandfather to his five grandchildren. He took every opportunity to spoil them by always sharing his favorite treats and sweet tea before sending them home. He had a very giving heart and would do anything for anyone. Those that knew Barry would say he was a simple man and very dependable; he hated being late. He showed up every time, no matter what, and was always an hour early. He will be terribly missed but his memory will live on through the hearts of those who loved him. Barry is survived by his Father Troy, siblings Mark, Kim, Terry and David; his beloved wife Michelle. Along with his sons, Nicholas, Chad, and Cody; Stepdaughter Megan, their spouses, Janell, Molly and Chris and his grandchildren; Jaxon, Rilynn, Koda, Charlotte and Morgan. Please join us for a Celebration of Life at Belfair State Park on October 2nd, 2021 at 12 p.m.

The family of Barry Monroe Tester created this Life Tributes page to make it easy to share your memories.