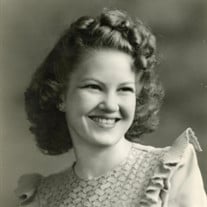 Betty Sue Falk Born in Beaumont, Texas Oct. 16, 1924 She had a very close relationship with her family and recalled many wonderful memories of her early days. Some early memories included a love of writing. She wrote short stories. She also had a love of music and singing. She sang on the radio during the war – a song called “My Alice Blue Gown”. During the war, Betty worked as a telephone operator in San Antonio, TX. Her relationship with Christ began at an early age and was a integral part of her entire life. In 1946 she married Austin Drexler which provided her with what she considered the greatest gifts God every gave her…her three children, Cynthia Ann, Joyce Diane and Robert Austin. After living a short time in California, Betty returned to San Antonio, TX and started a long and successful career at USAA as a Supervisor of the Message Center which had her in charge of over 75 women. She retired from USAA in 1969. In 1969 she married the love of her life, Delford Falk. She was so happy to add Diane, Becky and William (the three steps!) into her family She and Del enjoyed an active life of church, family and travel. She began a second career at Wayside Chapel in San Antonio, TX as secretary to the pastor. She retired at the age of 62. After the loss of her husband, Del she moved to Washington State to be close to children and grandchildren. She became a part of Harper Church in Port Orchard, WA. She volunteered in the nursery as well as the office and visitation ministry. She enjoyed tending her flower gardens, spending time with her friends and watching her family grow. She is survived by three children: Cynthia (William), Joyce (Rick), Robert (Terri). Four step children: Larry (Doreen), Dianne (Milt), Becky (Harold) & Bill (Cindy) Grandchildren: Michael, Dawn, Alisha, Sherry, Steve, David, Chris, Nathan, Jason, Lisa, April, Amy and their spouses 30 Great Grandchildren and 3 Great, Great Grandchildren. She will be greatly missed!

Betty Sue Falk Born in Beaumont, Texas Oct. 16, 1924 She had a very close relationship with her family and recalled many wonderful memories of her early days. Some early memories included a love of writing. She wrote short stories.... View Obituary & Service Information

The family of Betty Sue Falk created this Life Tributes page to make it easy to share your memories.