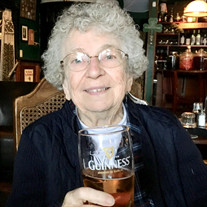 Beverly Ann (Haley) Nelson was born December 29, 1927 in Chippewa Falls, Wisconsin to Edward and Anna Iona (Schmidt) Haley. She was the sixth of nine children. After graduating from Marshfield High School, she moved with friends to Michigan and then Miami, Florida. In Miami, Beverly met her future husband Roger Alan Nelson who was in the Navy. They married in Reno, Nevada in April 1952 and made their first home on Buena Vista Island, California where Roger was stationed. During Roger's 20 years in the navy, the couple made their home in many locations throughout the US. They had daughter Kelly in Bethesda, Maryland, daughter Shannon in Bremerton, WA, and daughter Haley in Wisconsin Rapids, Wisconsin. Beverly spent most of her time as a homemaker during this time. After her husband retired from the Navy, they moved to Washington state and eventually made their home in Port Orchard, Washington in 1968. Beverly began working for South Kitsap School District and their Food Service as a bookkeeper and secretary. She spent almost 30 years working for the school district until she eventually retired. After retirement, she and her husband spent many years traveling by RV. She enjoyed needlepoint, birdwatching, genealogy, reading, knitting and spending as much time as she could with her grandchildren. Beverly was preceded in death by her husband Roger Nelson in 2011 and by her siblings Marjorie, Doris, Geraldine, Edward, Robert, Duane, and James. She is survived by her youngest sister Sharon (Haley) Aguilar and her sister-in-law Linnaea (Hanson) Nelson. She is also survived by her 3 daughters Kelly Seals (David), Shannon Madche (Terry), and Haley Robertson (Bill); 4 grandchildren Holly Simoncic (Brad), Tayler Seals, Katie Robertson, and Trevor Seals; and 3 great-grandchildren Braden, Brice, and Isabelle Simoncic.

Beverly Ann (Haley) Nelson was born December 29, 1927 in Chippewa Falls, Wisconsin to Edward and Anna Iona (Schmidt) Haley. She was the sixth of nine children. After graduating from Marshfield High School, she moved with friends to Michigan... View Obituary & Service Information

The family of Beverly Ann Nelson created this Life Tributes page to make it easy to share your memories.