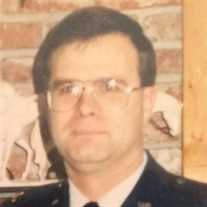 Bradley Wayne Mandeville was born in Oxnard, California on January 9, 1953. He passed away, suddenly, on October 09, 2017 from complications following a massive heart attack. He graduated from South Kitsap High School in 1971 and was the first person from there to be accepted into the Air Force Academy. He graduated from the Academy and served his country faithfully for 21+ years, retiring in 1995 at the rank of Major. Feeling he was too young for retirement, he embarked on a second career as a Deputy Sheriff with the Mason County Sheriff’s Office in Shelton, WA, where he once more served faithfully for 17+ years before retiring again in 2013. Brad was known for his sense of humor and dry wit as well as his penchant for giving overly detailed and long-winded answers to what should have been simple questions. He was someone that could be always be counted on in a pinch. He is survived by his loving wife of 42 years, Armenda K Mandeville (Vinson), his daughter, Deahanna R Hernandez (son in law Eric L Hernandez), and his three grandsons, Michael Bradley, Rafael Andres, and Daniel Felix. He is also survived by his mother, Beverly Mandeville (Somes), his sister, Deborah Mandeville, and his brothers, Randy Songer, Cameron Mandeville and Stephen Mandeville. Brad was preceded in death by his father, Jack Mandeville. Integrity, Service, and Excellence…they were the watchwords of Brad’s life. The USAF’s Core Values became the values that Brad lived by everyday for the whole of his life. “Integrity first, Service before self and Excellence in all we do.” He personified these values in every encounter and, in doing so, became a wonderful example to emulate…not only by his family and friends, but also the officers that he helped train. Brad was an amazing man, who loved his family, doted on his daughter and grandsons, and helped others as often as possible. He enjoyed a variety of activities, but some of his favorites were playing online games with (and without) his daughter and son in law, going to the movies (I just know that he’s getting the inside Star Wars scoop from Carrie Fisher right now), and sitting (wherever he could find a spot) and enjoying a good book…or three. He has left a hole, in all of our lives, which will be impossible to fill. Services to honor and remember Brad’s life will be held at 2 pm, Thursday, October 19th at the Rill Chapel’s Life Tribute Center 1151 Mitchell Avenue, Port Orchard WA 98366. There will be an onsite reception following the service.

Bradley Wayne Mandeville was born in Oxnard, California on January 9, 1953. He passed away, suddenly, on October 09, 2017 from complications following a massive heart attack. He graduated from South Kitsap High School in 1971 and was the first... View Obituary & Service Information

The family of Bradley Wayne Mandeville created this Life Tributes page to make it easy to share your memories.

Bradley Wayne Mandeville was born in Oxnard, California on January...