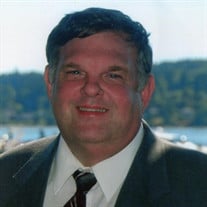 Bruce Morgan Waldron was born on December 31st, 1951 in Renton, Washington to Victor S. and Monja E. (Morgan) Waldron. He graduated from Bellevue High School and participated in baseball and wrestling. Bruce joined the United States Navy just after high school and served for four years, attaining the rank of Interior Communications Electrician Third Class. He also qualified for IC2 prior to leaving the Navy. He served aboard the USS Jason (AR-8), a Navy repair ship apart of the Western Pacific Fleet. After a year-long hiatus from the military, Bruce joined the Army National Guard and retired after twenty years with the rank of Sergeant First Class. He then began an apprenticeship as a Shipfitter of the Puget Sound Naval Shipyard and chose to remain in Shipfitting throughout his years there. Despite being well qualified for a promotion, he enjoyed the trade and opportunities to show new apprentices the ropes so chose to remain where he was. After retiring from the shipyard, he went to work at Home Depot in Gig Harbor, Washington. He quickly became noticed by management as professional and skillful, and soon they wanted him in management with them. Once again, he decided to stay in his position to help newcomers learn the value of hard work. In his free time, Bruce enjoyed the outdoors and partook in many hobbies. He enjoyed woodworking, hunting, target shooting, fishing, and camping. He was a true handyman. His favorite places to go were Ocean Shores, Washington, and Seaside, Oregon. Bruce was also a faithful Seattle sports fan. Through good or bad, he loyally watched the Mariners, the Seahawks, and the University of Washington Huskies. Bruce was a wonderful and devoted husband, father, and papa to his wife, children, and grandchildren. He loved to spend holidays, birthdays, and free time with family as it was important for him to make good memories. For him, family came first. Bruce was a hard worker and remained loyal and honest throughout his lifetime. Bruce passed away on October 26th, 2020. He was preceded in death by his parents and an older brother, Theodore Waldron. He is survived by his loving wife, Marie; daughter, Tina Knapper; son, Bruce Waldron; son-in-law, John Knapper; grandchildren, Abigail and Isabel Knapper; brother, Brian and his wife Kim Waldron; niece, Rachel Nelson; and great nephew, Halleck Remington. Bruce is and will be greatly missed by those that knew and loved him.

The family of Bruce Morgan Waldron created this Life Tributes page to make it easy to share your memories.