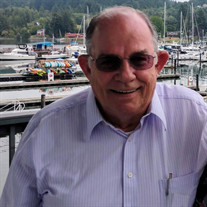 RPC(AW) Buddie Gene Moseley, USN, Retired, passed away March 6, 2020, following a long battle with cancer. He was 76 years old. He was a veteran of the Vietnam and Persian Gulf Wars and served in the US Navy for over 30 years. His duty assignments were: USS PENQUIN (ASR-12), USS SACRAMENTO (AOE-1), USS PASSUMPSIC (AO-107), NRD Seattle (Recruiting duty), USS RANGER (CV-61), CBC Port Hueneme, CA (Seabee Base), USS NIMITZ (CVN-68). He got out of the Navy for a few years and completed the 4-year electrical apprenticeship school at Puget Sound Naval Shipyard. He drove for the Kitsap Airporter for several years after he retired from the Navy. He was raised in Fort Worth, Texas, enlisting in the Navy at age 17. He loved volunteering for his Elks Club Lodge and for his local VFW Post. He never met a stranger, he could talk to anyone (he especially loved children and his cats; Missy, Sugar & Spice). He was a long time resident of Port Orchard, WA. Buddie and Vicky loved traveling and went on several cruises, they especially enjoyed cruising to the Panama Canal and Australia. He is survived by his wife of over 55 years, Vicky Moseley, of Port Orchard; his son and daughter-in-law, CDR Spencer Moseley, USN, Retired and April, of Apollo Beach, FL; his daughter and son-in-law, Samantha Moseley and Bulent Avci, and his beloved granddaughter, Leyla Avci, all of Renton, WA. He is also survived by his nieces, Jorge Ann Loa (Nokesville, VA), Julie White (Fort Worth, TX), and nephew, Joseph Thomas (Maricopa, AZ). He was preceded in death by his parents, Leo and Helen Moseley, and his sister, Sharon Chavez. Viewing at Rill Chapel on Tuesday, 3/10 from 10:00 to noon for family & friends. Everyone is invited to join us at a "Celebrate Life" memorial luncheon from noon to 3:00 at the VFW Post (on Mile Hill, Port Orchard). The VFW Honor Guard will hold a Honor ceremony for him about 2:00. A graveside gathering with Navy Honors will be 3pm Wednesday, March 11th at Washington Veterans Home Cemetery/Retsil. Family requests donations to St Jude's hospital in lieu of flowers.

RPC(AW) Buddie Gene Moseley, USN, Retired, passed away March 6, 2020, following a long battle with cancer. He was 76 years old. He was a veteran of the Vietnam and Persian Gulf Wars and served in the US Navy for over 30 years. His duty assignments... View Obituary & Service Information

The family of Buddie Gene Moseley created this Life Tributes page to make it easy to share your memories.