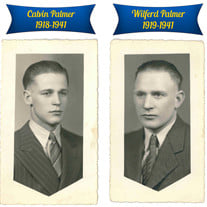 Calvin and Wilfred Palmer Two brothers who were raised as patriots by loving and doting parents in Minot, North Dakota where they learned how to work hard and play hard. Both were born in Andes, Montana; Calvin Harry on December 5, 1918 and Wilfred Dewey Palmer, born December 26, 1919 to Harry and Rosie Palmer. Upon their enlistment, Calvin would be listed as ruddy complexion, brown hair, blue eyes, 5’ 11”, 160#; Wilfred was also of a ruddy complexion, but had blonde hair and blue eyes, stood only 5’ 4 ¾” and weighed in at 153# being the more stocky and perhaps a bit scrappier. Their sister, Doris Houk is with us today and she remembers them as intelligent, loving young men that cared about their family. Both young men were fairly nice looking and generally dapper, but Calvin was the one that enjoyed looking GQ. Calvin fancied himself a bit of a lady’s man, the more athletic of the two his baseball prowess and the fact that he was a very good pitcher helped that along quite nicely. Wilfred was more studious and one of his favorite subjects was the Bible and particularly anything to do with repentance. Both were handy on the farm and were hard workers, but Wilfred was more concerned with finding odd farming jobs and helping the family with finances and making sure their three sisters had plenty of nice dresses and things. Perhaps one of the proudest days of their dad’s life was going in to sign for them to be allowed to join the Navy. There was at one point even talk of eventually trying to get into the Naval Academy. During one trip home on leave, Wilfred introduced one of their friends, Boatswains Mate Charlie Burns to Doris and told her that he was her husband. She said, I don’t have a husband, and Wilfred said this guy is going to be your husband. They became close and of course after the war, that did happen. All three men were stationed on Board the USS Oklahoma. After that meeting, they headed back to the Oklahoma and later wound up at Pearl Harbor. On December 7th, 1941, Calvin and Wilfred were in the interior of the ship working in the laundry when the Japanese attacked. Charlie was out running errands for the ship’s captain when he heard the bombs going off. He ran back to the ships laundry where he knew his friends Calvin and Wilfred were working and he tried to get them out. The door to the laundry was locked and Charlie’s key fell to an unreachable place and he even tried to break the door down. There outside the laundry room door he had to say goodbye to his two friends. Charlie had no more choices and had to leave the laundry room area and get to the main deck to jump into the water. When he got there the water was full of flames and he was somehow able to find an opening in the flames and jump into that water where there were no flames so that he was able to make it to shore safely. Calvin and Wilfred were lost on that fateful day and their bodies left not recoverable for a very long time. The family was devastated but after decades of research and work by the Defense POW/MIA Accounting Agency, they are finally home. They are survived now by their sister, Doris Houk, niece Helene Jensen and her husband Carl Jensen and their two children Rachelle and Carlene, Niece, Mardelle & Debra Willford & Nephew Charles Burns. Graveside service will be at Sunset Lane Memorial Park, Friday August 9th at 2:00 pm. In lieu of flowers please make a donation in their names to Gold Star Mothers or any other Veteran’s organization.

Calvin and Wilfred Palmer Two brothers who were raised as patriots by loving and doting parents in Minot, North Dakota where they learned how to work hard and play hard. Both were born in Andes, Montana; Calvin Harry on December 5, 1918 and... View Obituary & Service Information

The family of Calvin and Wilfred Palmer created this Life Tributes page to make it easy to share your memories.

Calvin and Wilfred Palmer
Two brothers who were raised as patriots...