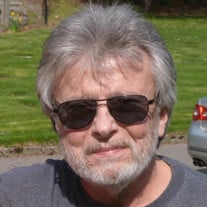 Calvin Ray Baines Jr. Calvin Ray Baines Jr, age 71, and longtime resident of Bremerton and Port Orchard, passed away peacefully but unexpectedly November 12, 2021 in his Port Orchard home. He was a beloved husband, father, grandfather and brother. Cal was born on August 20, 1950 in Philadelphia, PA to a Navy father, Calvin R Baines Sr. and Canadian beautician mother, Bengelena Martin Baines. They quickly moved to Virginia Beach, VA where they then added his sister Deborah to the Baines family. He enjoyed growing up in the South - going to school, the beach, hunting and shooting with his dad, hanging out with all of his cousins and playing drums. When he was 16, the family decided to move closer to his mothers family in Victoria, BC which ended them up in Bremerton, where Cal Sr. could work at the Puget Sound Naval Shipyard and they could all visit the Canadian family often. Cal Jr’s love of music followed him to Bremerton and he started putting a band together very quickly, becoming quite a local star over the years. He was a distinguished drummer and had an amazing singing voice. His first band was called the Sidewinders and they played at Peedleweezer where he coincidentally celebrated his 21st birthday. Other bands over the years included the Hudson Profit Expedition, Puget Sound Stagecoach Co., Tequila Sunrise (a house band at the Bremerton Bull and Bash), Joe Faker, White Ginger and eventually, The Imposters. He played music for most of his life while also taking a career with Puget Power and Light Company from which he eventually retired. He was a hard worker and had a gregarious and outgoing personality and could truly light up a room. He loved to tease and joke and make people laugh. Cal’s love of Fireworks also played a big part in his life, just as music did. He loved them so much that he began selling them. He oversaw multiple firework stands and eventually huge tents around the area for years and years. He then obtained his pyrotechnics license so he could light them off at some of the big Bremerton and Port Orchard shows, which he did. He truly loved the Fourth of July and the celebration of the independence of our great country. It must be mentioned that Cal loved animals and had all sorts of fun pets over the years. Anything from dogs, ferrets, birds and fish to snakes, salamanders and a tarantula named Melissa. He shared this love of creatures with all of his family and passed it on to each and every one of us. Calvin is survived by his beloved wife Tia Baines and their two children, Cray (Calvin R Baines III) and Madeline and his daughters Lisa-Raquel and Lia. He is also survived by his sister Deborah. He will be missed by his grandchildren David, Gabriel, Waylon, Clementine and Callie as well as his son-in-law Michael, daughter-in-law Rachel and niece Kameren, Aunt Sally, Uncle Dalton and cousin Kirk. He will be remembered as a fantastic musician, a caring friend, father and husband, and his great personality and great laugh. If you know Cal, please join us for his service Saturday at 1pm at Rill Chapel. 1151 Mitchell Avenue, Port Orchard, WA 98366. A celebration of Cal's life will be celebrated afterwards from 3PM-6PM at the Manette Saloon 2113 E. 11th St. Bremerton.

The family of Calvin Ray Baines Jr created this Life Tributes page to make it easy to share your memories.