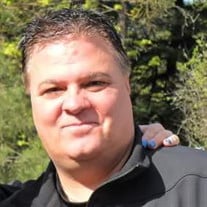 Carl Grutzeck, age 57, passed away April 27, 2018 at Swedish Medical Center in Seattle. He resided in Port Orchard, Washington with his wife and his immediate family members as well. Carl was born February 6, 1961 in Brooklyn, NY to Carl Sr. and Louise Marie (Nardo) Grutzeck who both preceded him in death. He had one older brother Steve whom he so loved and enjoyed as they shared many laughs during visits as they lived a far distance for many years. Carl absolutely adored his mother Louise his whole life and never got over losing her 6 years ago. Carl grew up in the Bay Area in northern California where he graduated from Livermore High School in 1979. He later attended Chabot College and received a soccer scholarship for UCLA. Soccer was his passion as he lead his team to many goals and wins earning them opening for the San Jose Earthquakes. In 1990 Carl met Jody, the love of his life. They began their 28 year love story together and married on August 3, 1994. He was her world as they found their way through life. He devoted his life to her and loved that he could provide for his family so she could be a stay at home mom for their children. They had one daughter together, Ashlynn, born in 1992. She stole his heart the moment the ultrasound said it was a girl and was so happy he insisted he give Jody the baby shower for her. Happiness filled his life again when his grandbaby girl Harpor arrived in June 2015. He was so incredibly proud of Ashlynn becoming a wonderful mother. Carl also had one son Auston who he would day was the son he had always wanted and was given. He loved the bond they both had especially for sports. Carl loved playing baseball as did Auston they got to play on their church league team a few years back. There is nothing he’d rather do than spend their time together discussing or watching their favorite teams in most all sports, especially the Mariners and the Seahawks. There was another special love in Carl’s life. That was his Shi Tzu doggie Piper. He called himself her daddy and absolutely loved taking her everywhere he would go. The thought of him driving through town with the top down on his Mercedes and Pipers ears flapping in the wind brings many smiles and will never be forgotten. He was one of a kind and just enjoyed life. Carl had a long career in the auto industry, 20 years, where he worked for car dealerships in the surrounding area. He worked so very hard all those years that took him from a top car salesman to one of the top managers running a sales crew. As a manager he found in his ability in training and leading his crew of salesmen that he genuinely cared for them and their families. This was easily seen and felt by those around him. His long devoted career led him to acquiring lasting friendships along the way but most importantly to him a fulfillment in his life for being able to give and help people. He was a true giver he selflessly gave with his while heart to his family, friends, coworkers and to his customers all he was able to do or give. If he didn’t have a way, he’d find a way. That was who he was. All us who knew Carl and loved him are heartbroken as we was taken too soon. His contagious laugh, his love of his music and movies… when we hear it we think of him… Rocky 1-5 and Aerosmith… his wise advice and his caring wing he placed so many of those he cared about under. He was blessed to have amazing friends for every friend he made he would soon call his family. Carl loved the Lord Jesus and along with Jody they raised their two children up in this belief. He was so brave and strong to the very end. In the last few days of his precious life he said he wasn’t afraid to die as he knew where he was going. His family and other loved ones may feel the peace in him proclaiming that is where he is spending eternity. Carl is survived by his loving wife Jody Grutzeck; two children, Auston Achziger and daughter Ashlynn Marie Toth and her husband Travis Toth all of Port Orchard; one brother Steven Grutzeck and his wife Theresa of Danville, California; sister-in-law Tammy Johnson of Port Orchard and brother-in-law Don Skelton of Kingston. Other loving survivors include one grandchild Harpor Amari Toth and numerous nieces, nephews and aunts he adored from all over the U.S. A celebration of Life Service will be held Sunday May 20th, 2018 at 2:00 PM. The location is Family Worship Center @ 4647 Sidney Rd. SW in Port Orchard, Washington, 98367. Pastor Stan Morris will be officiating the service. Carl’s family would like to thank Rill Chapel Life Tribute Center in Port Orchard for all their efforts and assistance.

Carl Grutzeck, age 57, passed away April 27, 2018 at Swedish Medical Center in Seattle. He resided in Port Orchard, Washington with his wife and his immediate family members as well. Carl was born February 6, 1961 in Brooklyn, NY to Carl Sr.... View Obituary & Service Information

The family of Carl Henry Grutzeck Jr. created this Life Tributes page to make it easy to share your memories.