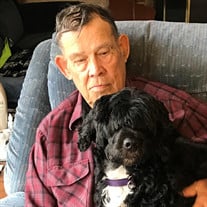 Carl was born August 10, 1935 in Worthington, Minnesota to Rosie and Carl Lyden Senior. Carl was the 4th of 5 boys. His brothers were Ole, Alexander, Lester, and Charles. Growing up in a small farming community was a great place for young boys to grow up. I cannot repeat some of the stories my father told of he and his brothers escapades. But the ones I can involve fishing on both warm summer lakes and cold ice covered ones and driving old cars down through the fields and on many a frozen lake. Dinners’ protein source often came from those fishing expeditions. In Minnesota, the easy fish to catch are bullheads, croppies, and bluegill but Carl senior and his sons loved to fish for walleye. It’s a much more difficult fish to catch but considerably better for dinner. Many hours were spent sitting (completely quiet) in a boat or ice house fishing for walleye, a practice that, as a child, I couldn’t understand how that was fun. Carl learned to love cars and his hobby was modifying them and fixing them. I am not sure where he acquired his ability to fix most anything as his brothers didn’t have the same enthusiasm. As a teenager, Carl almost burned the barn down having thought it a good idea to light a small fire under his frozen car engine so he could start it. Luckily the barn and the car survived. Throughout his life Carl had a car, truck, or boat project that he was working on. No matter what the project it usually involved making it go faster. Carl followed in his father’s and older brothers’ footsteps and, as soon as he could, joined the Military, choosing the Air Force in August of 1952. After basic training, he became a Military policeman and was sent to Korea. There he learned to train guard dogs and hate rice. After his tour in Korea he rotated back state side and was stationed in Omaha, Nebraska where he met and began dating a young lady working as a waitress in a diner named Eleanor ( Ellie). Carl separated from the Air Force in August of 1956 and decided to follow his older brothers Ole and Alex to Washington State. After relocating he decided he really missed Ellie and wrote her a letter asking her to marry him and move to Washington. Ellie packed up her old car with all she had and moved halfway across the country to become Carl’s wife. On May 11th, 1957 Carl and Ellie were married at the First Baptist Church in Sumner, WA. His next older brother Lester was his best man and Lester’s wife Betty was Ellie’s matron of honor. In March of 1964 Carl and Ellie welcomed their only child, Chris, into the world. Unlike his older brothers, Carl decided not to live in the coastal town of Westport, WA but rather he and Ellie settled down in Tacoma, WA. They purchased a small house on Faucet street where they lived until the birth of Chris. They decided they needed more room so purchased their second and last home, where Carl lived for almost 53 years and where he spent his final days. After moving to Washington Carl worked brief periods at Kaiser Aluminum, Tacoma City Light, and as a travel trailer repairmen before finding his long-term career at General / Continental Tire as a serviceman and finally a service manager. He retired from Continental Tire with a disability after a large tire fell on him causing a lifelong back injury. Since Ellie was still working he soon found he needed something to do so he acquired a commercial driver’s license and began driving school bus in and around the Tacoma area where he worked into his 70’s. Carl lost his best friend, travel companion, fishing partner, and wife on April 20th, 2005. During their 48 years of marriage they did everything together. While growing up I don’t remember being home very many weekends. No matter winter, summer, spring, or fall we were going somewhere camping, fishing, and exploring, usually with one or more of his brothers and their families joining in. Vacations included truck and trailer trips to Minnesota, Nebraska, Northern British Columbia, Eastern Washington and Oregon, California, and even Alaska. Carl didn’t go anywhere that he couldn’t find something to go fishing for and every trip had him attempting to catch whatever the locals considered the best. Ellie was a great sport as she would wade into the coldest river, sit patiently watching her pole, and even masterfully cook fish, oysters, crab, clams, you name it. However, most of it she would never consider eating. Later in life one of their favorite places was Hood Canal. There they met Frank and Sally, who welcomed them to their waterfront resort property as a place to park their motorhome. From there Carl and Ellie went shrimping (mom’s favorite), crabbing, shucking oysters, and digging clams (she would enthusiastically participate but wouldn’t eat a bite) . After Ellie’s passing Frank and Sally’s place became Carl’s escape from a home that only reminded him of how lonely and empty it was without Ellie. Carl’s family was always important to him and he kept his brothers and their families close. He is survived by his son Chris and his wife Ingrid and his youngest brother Charles and his wife Caroline, along with nieces (Debbie, Donna, Phyllis, Cheryl, Punkin) and nephews (David, Charles Jr (Bubba)) and several great nieces and nephews. https://support.woundedwarriorproject.org

Carl was born August 10, 1935 in Worthington, Minnesota to Rosie and Carl Lyden Senior. Carl was the 4th of 5 boys. His brothers were Ole, Alexander, Lester, and Charles. Growing up in a small farming community was a great place for young... View Obituary & Service Information

The family of Carl John Lyden created this Life Tributes page to make it easy to share your memories.