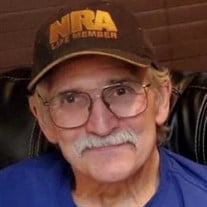 Carl Eugene Pennington, of Port Orchard, passed away peacefully at home; surrounded by his loving family, on May 29th, 2021. Carl was born in Pine Bluff, Arkansas on October 8th, 1956, to Findley Moffett and Geralene Pennington. Eventually the family moved to Union City, California where Carl would grow up. Carl graduated from James Logan Highschool, where he excelled on the wrestling team and competed internationally in Judo, winning many awards and holding a brown belt. At age 16, Carl married the love of his life, Chyrel. This August would have been their 48th anniversary. After graduation, Carl and Chyrel had their first daughter, Corrie. Carl began working as a welder. After their 2nd daughter, Patricia was born, Carl and Chyrel moved to Washington state to begin a new life with there young family. In the early 1980’s, Carl joined the Carpenter’s union and would become one of the best pile drivers and welders on the west coast. He spent many years traveling from Alaska to San Diego building bridges and docks. Carl worked on the installation of the Lacey V. Murro floating bridge in Seattle WA, Terminal 90 in the Port of Seattle, Bellevue Access I-90 bridge and Pier 69 in Seattle just to name a few of the many local projects he was a huge part of. In 1994, Carl suffered a traumatic brain injury while on the job. Most people with this type of injury would have retired from such a strenuous career, but not Carl! He was determined to work and thrive. Carl went to work for General Construction Company as a Pile Driving Superintendent in 1995. Carl oversaw all of the pile driving /welding for the Pier 66 expansion in Seattle. Next it was on to Wanapum Dam in Eastern WA to supervise on the Fish Bypass project. Carl then traveled to L.A. as the pile driving superintendent for the Port of L.A. Berths 302-305. He gave it his best, but the injuries were just so devastating. Sadly, Carl was forced to retire. After retirement he enjoyed working in his shop, helping family and friends with projects and teaching his oldest grandson how to weld, a true blessing to pass down a piece of his legacy. Carl also enjoyed a great movie, working out, time with his family and influencing his grandchildren. Carl’s pride and joy was being a Papa to his 7 amazing grandkids and 2 great grand-girls. He would tease that “nothing good comes from kids” and in the next breath say, “papa always says the opposite.” Carl worked extremely hard his whole life to provide the very best for his family, his generosity and loyalty was his best traits. He will be deeply missed by many. Carl was preceded in death by his father and mother. He is survived by his loving wife Chyrel, daughters Stephanie (Jason) and Patricia (DWayne), sister Carol (Doyle), grandchildren Shyrel (Evan), DeAndre, DeAnte, Ian, RyAnne , DeVon, and Yitbarek, great granddaughters Emersyn and Camdyn.

Carl Eugene Pennington, of Port Orchard, passed away peacefully at home; surrounded by his loving family, on May 29th, 2021. Carl was born in Pine Bluff, Arkansas on October 8th, 1956, to Findley Moffett and Geralene Pennington. Eventually... View Obituary & Service Information

The family of Carl Eugene Pennington created this Life Tributes page to make it easy to share your memories.