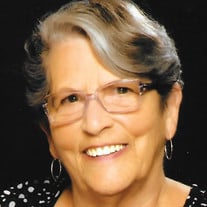 Carol Cadigan passed away peacefully Monday, October 8, 2018 at the age of 77. Carol is survived by her son Richard (Jackie) Cadigan of Seaside, CA, daughter Cathy (Jeff) Colescott of Port Orchard, WA, and daughter Susie Cadigan of Palm Desert, CA. She is also survived by seven grandchildren and one great-grandchild; Blake (Alison) Cadigan and Kyle (Michelle) Cadigan and son Timothy, Sarah, Elizabeth and Matthew Colescott, and Nicholas and Kaitlyn Weycker. Carol was born January 8, 1941 to Louise and Amiel Figrouid on Mare Island Naval Reservation, Vallejo, CA. The middle child, Carol grew up in Oakland, CA with her sisters, Louise and Kathy. Carol was preceded in death, six months earlier, by Don, her loving husband of nearly 57 years. She was also preceded in death by her parents and sisters. Carol spent her childhood years growing up in Oakland with fond memories of playing with the neighborhood children, spending weekends at her Aunt and Uncle’s farm in the country, and many camping trips fishing along the Klamath River. Carol’s life changed when she began attending Oakland City College in 1958. Carol spotted a tall young man sitting in the front row of her business machine class. In 1961 she married him! Don and Carol were married in Oakland on September 16, 1961. While honeymooning in Las Vegas, they read in the newspaper that Don’s Army Reserve unit was being recalled to active duty due to the construction of the Berlin Wall. Carol and Don immediately returned to Oakland to prepare for their cross country move to Fort Devens, MA. While in Massachusetts, Carol and Don lived in an attic apartment and experienced, as Carol would describe, “a very growing time!” Carol worked at Sears in the credit department and with their little extra money they were able to travel a bit before returning to Oakland during the late summer of 1962. Upon returning to Oakland, Carol worked for a collection agency for two years and quit work just prior to the birth of Don and Carol’s first child. Richard was born in June, 1964 and was quickly followed by a sister, Cathy in May, 1965. Carol had her hands full! Moves to Sacramento, Sunnyvale, and San Jose, CA for Don’s job made life exciting. In November, 1971 Susie was born and Carol, Don, and family moved six weeks later to Palm Springs, CA. Carol and Don would spend the next 43 years in Palm Springs. Carol dedicated herself to raising her children, serving as PTA President, volunteering with children with special needs, and being “mom” to many of the neighborhood kids. Carol always enjoyed bookkeeping and was often the volunteer treasurer for various groups. She decided that she would set up her own bookkeeping service and run it out of the house and get paid for something she always loved doing. For five years she kept the books for three businesses. The year following Don’s retirement, Carol closed up her business and Carol and Don embarked on their next adventure! Carol and Don loved to travel. During their lifetime they enjoyed dozens of cruises all over the world, multiple land tours, and were fortunate enough to visit all seven continents. Carol was able to engage in her love of photography during all of these trips and had the photo albums to prove it! In 2011 Carol and Don became snowbirds. They purchased a waterfront condo in Bremerton, WA, spending the summers enjoying the wonderful Pacific Northwest weather. After a few years they realized they wanted to make Washington their permanent home and after 43 years sold their home in the desert, as well as their condo and moved to Port Orchard near their oldest daughter, Cathy and family. Carol enjoyed her last years traveling with Don, watching the deer out her window, and marveling at the four seasons the Pacific Northwest provided. Carol’s family wishes to thank the staff at Stafford at Ridgemont for the love and care they showed Carol and our family during Carol’s last months.

The family of Carol Ann Cadigan created this Life Tributes page to make it easy to share your memories.