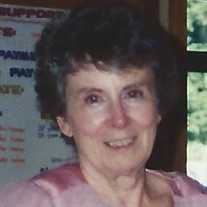 Catherine Strub, 96, died on Wednesday November 14th in her Port Orchard Home, surrounded by her Legacy of Love; Her Family. She was born Catherine Spencer on March 10th,1922 to Charles Edmond Spencer (Ed) and Mabel (Marrs) Spencer. A blizzard that day left so much snow her mother had to be driven from Coeur d'Alene to Spokane's Sacred Heart Hospital in the city's tow truck. It was late in the year for heavy snow. One could speculate that the storm, Elemental ions swirling with the clear glacial waters, the crisp air and the untouched beauty of the forests and lakes surrounding her hometown may have imprinted her with a purity of intent, a clear perception of purpose and a penetrating intuitive ability to see beyond the mundane. Deeply spiritual and compassionate, she was an inspiration and a comfort to all she met throughout her fulfilling and adventurous life. Catherine and her older (2 years) brother Robert, and her younger (2 years). twin sisters, Marie and Margaret, moved with their parents to Tahuya in 1929 to homestead, there was a one room schoolhouse with 2 teachers (a young married couple) and seven students. They lived in Tahuya until their house burned, then they moved to Annapolis, Washington. Around that time Catherine's father died of pneumonia. Ed was City engineer for the city of Spokane and had contracted pneumonia while working with the army corps of engineers creating trails through Glacier National Park. Once again, the lovely home was darkened by the untimely death of her older brother of 13, she was 11. It was a terrible loss to the family, he was a wonderful boy who tried to be the man of the house. The dynamics of her life changed drastically when she became the oldest child. That gracious home was also where Catherine lived when she met her future husband, Henry (Hank) Strub, shortly before she graduated from high school. Mabel married again, Mose Clark, and had three more children, two boys and a girl, Martin, Rosemary and William. Catherine was the oldest girl and adored her young siblings, she was happy to help care for them, and as with all of Mabel's children they became outstanding adults. Catherine through her mother's ancestral line were descendants of a long line of exceptional women, capable beyond average, country doctors and midwives, fine gardeners and artful seamstresses, musicians and artists, excellent cooks, intellectuals, doctors, nurses, teachers' all geared towards making a better world, and able to sacrifice for the common good; but their greatest talent was in creating the perfect environment for raising the next generation. They created a haven of learning rich with culture and morality, comfort and intellectual challenge. They were conscious of the examples they were setting at-all-times and acted with great integrity. She gave her children enough structure to feel secure and then the freedom to develop in their own way their dreams and aspirations. Catherine was an honors student and volunteered as a candy striper while in high school. She had a natural aptitude for nursing and planned to become a nurse after graduation. Then she met Hank and knew where her future would be. Together they would share a love that no one doubted would last beyond their lifetime. They were married November 9th, 1940 at Star of the Sea church in Bremerton. They would continue on to be Pioneers of St Gabriel Parish in Port Orchard. Catherine was active in the church thru the altar Society and teaching catechism. For many years she worked summers in Dillingham in the family fishing enterprise with her sister Margaret, cooking and cleaning in the seasonal fishing camps. She was a tender and soothing nurse to her family. Hank had many jobs as a young man and wasn't afraid of hard work. He started out as a carpenter and took a course in civil engineering. He worked mostly in Marine Construction and worked more than once on the dry docks in Bremerton. He was superintendent on many of the I-5 and 420 overpasses and on the Tolt River Dam. The last construction that he was superintendent on in the US was the Astoria Megler Bridge, then he moved to Bahrain where he was General Manager of the oil construction project in the Persian Gulf. Catherine always moved her big family and followed her husband; the entire family moved. Catherine carried beauty and order with her and all had many shared wonderful adventures of a lifetime. In Bahrain they lost a son, David, 19 years of age. A year later Hank was injured and forced into early retirement. Their marriage became as close if not closer than it had ever been. They had eight children they raised together over the course of a 56 year marriage: 4 boys and 5 Girls. All adult children are hard workers and successful in the fields they have chosen and responsible loving parents themselves. Catherine and Hank's clan in pecking order: Henry Strub, Bob Strub, David Strub, Marie Collins, Linda Strub, Charles Strub, Margaret Strub, Ellen Waye & Jeannette Davis. Also; 21 grandchildren, 28 great-grandchildren, and 4 great-great grandchildren. All knew they were loved by her. All are exceptional people. All will miss her sterling presence deeply.

Catherine Strub, 96, died on Wednesday November 14th in her Port Orchard Home, surrounded by her Legacy of Love; Her Family. She was born Catherine Spencer on March 10th,1922 to Charles Edmond Spencer (Ed) and Mabel (Marrs) Spencer. A blizzard... View Obituary & Service Information

The family of Catherine Clare Strub created this Life Tributes page to make it easy to share your memories.

Catherine Strub, 96, died on Wednesday November 14th in her Port...