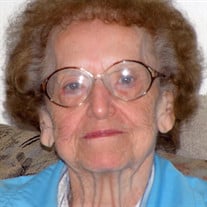 Cecilia Ruby Tate, 97, died December 6, 2019. She was born November 18, 1922 in Piniele, Montana to Peter and May (Phelps) Kruse. The family then moved to Hibbing, Minnesota where Cecilia spent most of her childhood. She later as a young adult moved to Seattle, Washington where she worked as a telephone operator. She met and married her beloved husband, Robert Tate. As a military wife, she lived in numerous states and traveled abroad, Cecilia and Robert then settled down in Port Orchard, WA with their children in 1960. Cecilia grew up in the depression era where times were very hard for her family. She learned to be strong and resilient as a child and this would carry her threw the rest of her life. Cecilia was catholic, very spiritual and prayer was a part of her life. Cecilia was witty, kind, loving, and compassionate. She was always willing to help others that needed help. She was forgiving and never held a grudge to others, Cecilia lived a long life and saw so many changes in this world. Cecilia loved cooking, gardening, bowling, walking and playing cards with friends. One of the biggest joys in her life was spending time talking and laughing with all of her family. She loved being a Mother, Grandmother, Great Grandmother, and Great-Great Grandmother. Cecilia was preceded in death by her Parents, Husband Robert Tate, Son Daniel Tate, Great Grandson Alijah Tate, Sister Mildred, Brothers Charles, Earl, Harold, Raymond, and Kenny. Cecilia is survived by Daughter Debbie (Jim) Hunter, Grandson Aaron (Rachelle) Tate, Grandson Jacob (Crystal) Tate, Great Grandchildren Brecklyn Cecilia Tate, Anthony (Heather) Ackaert, Eva Tate, Makayla Tate, Great-Great Grandchildren Ava, Kendall, and little Jacob. Cecilia is also survived by step Grandson Matt (Katie) Hunter, step Granddaughters Anastasia (Trever) Johnson and Erika Hunter, Also step Great Granddaughters Abbie, Hallie, Lexie, Emily, Olivia, and Tabitha. Cecilia touched so many hearts in her lifetime. She was truly someone you would not forget. She loved life and will be loved and missed dearly by her family and all that knew her. There will be no service, but a Celebration of Life will be planned at a later date.

Cecilia Ruby Tate, 97, died December 6, 2019. She was born November 18, 1922 in Piniele, Montana to Peter and May (Phelps) Kruse. The family then moved to Hibbing, Minnesota where Cecilia spent most of her childhood. She later as a young... View Obituary & Service Information

The family of Cecilia Ruby Tate created this Life Tributes page to make it easy to share your memories.