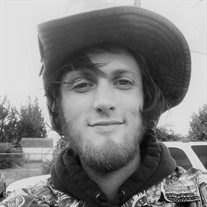 Chad Michael Edward Albertson, age 26, was killed in a car accident on January 25th, 2021 along with his girlfriend Sienna Toutai, age 21, and their cat Rain while on their way to the vet. Chad was a free spirit who had no interest in living a conventional life or accumulating material things. He was happy with little and never complained about not having more. Despite, or maybe in spite of, being judged for his way of life and outward appearance, he never judged others and always gave them the benefit of the doubt - even when one’s track record didn’t deserve such grace. Chad loved all kinds of music, the weirder the better. He always seemed a little bummed that he couldn’t play an instrument but that didn’t stop him from trying to learn or strumming along for the heck of it to the tunes playing in his head. What he lacked in musical talent he made up for in his way with words. Chad filled many a spiral notebook with his song lyrics and poetry that he shared with those close to him. He loved to discuss and quote movies, not infrequently would he surprise you with his vast knowledge of an obscure film that was usually accompanied by a funny story of why and how he had come to see such a film. When Chad was about 10 years old, he discovered and fell in love with skateboarding. He was incredibly talented at skateboarding; he and his friends would go to all the places they weren’t supposed to skateboard and film themselves doing skateboard tricks that would later be uploaded and viewed online. Chad worked in a skate shop for a little bit and earned himself a modest sponsorship by way of his skating talent. He never outgrew his love of skating and enjoyed it up until the end of his life. Mostly, Chad loved his cats, his family, and friends, and he loved Sienna. With Chad, you never would need to wonder if he cared about you. If he did, then you knew, and you knew you were the better for it. He loved you with all his heart and never wanted anything in return – he was content with just your company. Chad taught us that only a life lived for oneself is a life worth living, that being yourself was more important than changing to please others, or wasting time pretending to be something you’re not. He was funny, tenderhearted, and always genuine. Chad was loved by many, will be missed by many, and will leave a Chad sized hole in the hearts of those that love him for eternity. Preceding him in death are his grandmother Judy Hackstedde, his beloved cat Domino, and dear friend Forrest Goodin. He is survived by his mother Erin Crouse (Hackstedde), siblings Chandler Vaughan, Olivia Vaughan, and Damon Crouse, grandparents Ed and Lorri Hackstedde, close great-aunt Kathy Powell, and numerous great-aunts, great-uncles, cousins, and treasured friends. The funeral service for Chad will be held at 3:00 pm on Saturday, February 27th, 2021 at Rill Chapel in Port Orchard, Washington. A live stream of the service will be made available for those who are unable to attend in person.

Chad Michael Edward Albertson, age 26, was killed in a car accident on January 25th, 2021 along with his girlfriend Sienna Toutai, age 21, and their cat Rain while on their way to the vet. Chad was a free spirit who had no interest in living... View Obituary & Service Information

The family of Chad Michael Edward Albertson created this Life Tributes page to make it easy to share your memories.