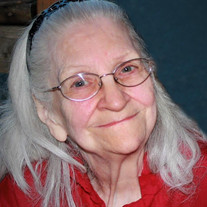 My mother, Charla Miles was born on September 14th 1929 to Fredrick Rudolph Bauer and Mary Rose Webb in Lead, South Dakota. She was born with a twin sister who passed away at an early age. She also had an older sister, Darlene and an older brother, Kenneth. Every time we would complain about our food my mother would remind us of her family's struggle during the Great Depression during which time she had to eat rotten bananas and walk for miles in shoes that were too small and had holes worn through them. She told us stories of her father's catfish that would melt in your mouth and how she would walk for miles and miles from school just to have it for lunch and then walk miles and miles back to school. She really likes catfish I always thought. Mother's family did not have an easy life, they moved a lot to places like Utah, Colorado, Wyoming and so on. She did not get much of an education because of the constant moving. She left home at an early age and told people she was older than she was. I remember a story my mother told me about when she was waitressing at a diner. She felt sorry for how little the portions were so she would add more and get in trouble and have money taken out of her wages. She has always been generous. Mother also worked at Hanford Nuclear Power Plant in Washington as a janitor. She moved to the Tri-cities where her children were born in Pasco and Kennewick, Washington. In 1966 she picked up and moved her family to Port Orchard where she stayed until God called her home. Mother had many grandchildren and great grandchildren and even a few great great granchildren, and every one of them loved their Grandma very very very much. Mother took a job at the Bremerton Naval Shipyard in the galley until she got a job at the Bangor Base. She made the wiring harnesses for the submarine torpedos that were used to protect the United States of America. She took her family to the Bangor family picnics that the family still looks at pictures from and shares stories about to this day. My mother was seen as a giver by me and my sisters. I remember her buying shoes for my friends who could not afford them. There are too many stories like that fit on paper, she would never let a child go without if she could help. Her hobbies included doing crafts but the most memorable for our family is her collecting Hot Wheels and making books of collector's cards, never for her self, always for her kids and grandchildren, and even other children. I would sometimes tease my mother about her having an addiction to collecting non sport cards. If she got an address to a new card shop she would go sit in the car telling me It's time to go to the card shop, we went on a lot of road trips for cards. Lynwood, Federal Way, Centrailia, etc. But her favorite was Northwest Sport Cards where she would pick up supplies for her hobby. I remember ordering entire boxes of cards such as The Flinstones, Batman, Looney Toons and others and she was always anxious to get them, asking where they were the very next day. Mother's addiction! When her collector cards would arrive she would have a big smile and she'd turn night into day finishing up card books for the kids. The happiness it brought her made it all worth it. Tammi would help mother sort out the cards and keep them in order. Sometimes this was hard for Mother, Tammi, and me because our eyes just aren't as good as they used to be, but Mother fixed the problem by buying a high powered magnifying glass. Problem solved, the work must go on! Bottom line, she was not a selfish person, she was generous and loving and rarely complianed. She taught everyone around her how to love. Mother's hardest time was dealing with the passing of her daughter, Alice. She said a mother is supposed to die before their children, it broke her heart. Now they can be together. One of my mother's saying was " life is not easy in this world " I always helped with the family and we did what we could to make her life easier here. We will all miss her being here with us on this earth, but know we will see her again when our time comes. We have reminders of her here in our everyday lives, she definitely left a legacy. She touched our lives so much. We love you forever Momma

My mother, Charla Miles was born on September 14th 1929 to Fredrick Rudolph Bauer and Mary Rose Webb in Lead, South Dakota. She was born with a twin sister who passed away at an early age. She also had an older sister, Darlene and an older... View Obituary & Service Information

The family of Charla Miles created this Life Tributes page to make it easy to share your memories.

My mother, Charla Miles was born on September 14th 1929 to Fredrick...