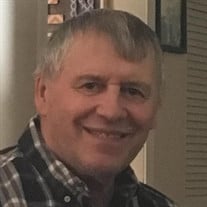 Charles J. Bozinski, 71, of Port Orchard, WA, died Wednesday May 24, 2017, at Orchard Pointe Memory Care Center in Port Orchard WA. He was born July 3, 1945 in Green Bay Wisconsin, son of the late Charles J Bozinski and Florence (Tomczak) Bozinski. Was loved and raised by his Grandparents, whom he cherished deeply, the late Michael J Bozinski and Pauline (Gustors) Bozinski. Charles graduated in 1964 from Central High School in Superior, Wisconsin. That same year he joined the U.S. Navy and proudly served his country aboard the USS Oriskany (CV-34) and the USS Samuel Gompers (AD-37). During his time in the Navy he served in the Vietnam War, saw several foreign countries and learned the trade that he would work at, till the day he retired; sheet metal. He was honorably discharged in 1968. Following his time in the U.S.Navy, he began his apprenticeship in sheet metal at the Puget Sound Naval Shipyard in Bremerton WA. Later, completing his apprenticeship with Sandberg Sheet Metal in Superior Wisconsin. This was followed with a decade of employment with Walker Jamar in Duluth Minnesota and in an ironic twist, completed his working career where it all began back in 1968. He returned to Puget Sound Naval Shipyard in Bremerton WA. From 1982-2007 he worked in Shop 17 and never once complained about his job. Charles was a lifetime member of the Sheet Metal Union. During his retirement he found great joy in volunteer work and lent his abilities to the Department of Fish and Wildlife, Kitsap County Elections Office and helping Veterans at the Retsil Retirement Home In Port Orchard, WA. He was baptized, confirmed and married in the Catholic Church and had a deep admiration for the Lord. His hobbies were numerous and included: hunting, hiking, mushroom picking, painting, youth sports, basketball, baseball, horseshoes and much more. His true passions were fishing and softball. He was well respected as a fast pitch softball pitcher for many years. When age and his arm wouldn’t allow him to pitch any longer he focused his efforts coaching area youth. His girls softball team was known as ‘Charlie’s Angels’. Fishing however defined him. So many people who knew him, have a tale to tell about spending the day fishing together. On November 3, 1967 he was married to Helen Bozinski of Seattle Washington. They remained happily married for 49 and half years. Surviving are a son, Michael J Bozinski, Port Orchard, WA; two daughters, Gena L. Lubken, Thornton, CO, and Dana L Porter, Port Orchard WA, : six grandchildren, Randi Hubbell, Cassidy Willett, Bailey Lubken, Carissa Porter, Kayla Bozinski and Matthew Bozinski. Besides his wife, children and grandchildren, Charles is survived by a brother, Edward Bozinski, Superior Wisconsin and 2 sisters, Gloria Krivenchuk and Marion Arnold both of Superior, Wisconsin. Charles will be laid to rest at Sunset Lane Memorial Park in Port Orchard, WA. A private ceremony will be held for family only. Please feel free to leave any comments or memories at this website.

The family of Charles Bozinski created this Life Tributes page to make it easy to share your memories.