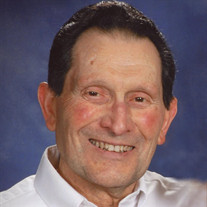 On Friday morning, August 18, beloved husband, father, grandpa and friend, Charles Edward Cookson, breathed his last and was transported into the arms of Jesus. We're sure his homecoming was marked with a big smile and warm hug. Both were a trademark of Chuck Cookson. The other was simplicity of heart and life--two rare qualities in today's complex world. Chuck Cookson was born on August 6, 1926, in Port Orchard, Washington during the Roaring Twenties. His father, Leonard Cookson, built a small home at 816 Sidney Street, only six blocks up the hill from the downtown waterfront. His mother, Clara Dixon, was three-quarters American Indian and a gracious woman who worked extremely hard. Chuck was the youngest of three and said he was born in the "shack" behind the three bedroom house. The 1930's and 40s were hard times as Clara worked numerous jobs, the children contributed their meager earnings, and they even housed boarders at their home. Chuck graduated from South Kitsap High School in 1944, and after some electrical apprenticing, decided to open a Texaco gas station with his brother, Tom, in 1947. Cookson's Texaco stood just across the street from the Port Orchard City Hall. Tom sold his part in the business a few years later, but Chuck faithfully manned his post for the next forty-two years. Many in the South Kitsap community knew Cookson's Texaco as it was the only filling station with a sign which read: "If You Can't Stop, Smile as You Go By." The gas station hired a young bookkeeper in the late 1940s. Margaret Irene Taylor married Chuck on August 7, 1950, one day after his 24th birthday. Two months later they moved into an 800 square foot upstairs apartment just one hundred yards from the station. Chuck and Margaret would spend the next 67 years together in that same location. Their only child, Shirley Jean, was born into the family on February 26, 1952. She is now married to Ron Boehme and they have six wonderful children. Chuck was one of the hardest-working men we ever knew. He served his customers with grace and warmth. He was always generous with gas, help, and his famous smile. Chuck and Margaret were members of First Christian Church in Port Orchard. Chuck was baptized in the 1960s. He would later serve as a church greeter, known for his warm and firm hugs. He was also a rabid Seahawk fan, and followed them all his life. Chuck died on a "Blue Friday." (Fans will understand.) Chuck's was a simple but great life. You don't measure a person's existence by countries visited or possessions owned. All that really counts is faith and love which, when completed, bring everlasting hope. Chuck Cookson's faith brought him salvation through Jesus Christ. His life blessed many others. A Memorial Service will be held in his honor on Saturday, September 16, at 11 am at First Christian Church in Port Orchard (4885 SW Hovde Road, Port Orchard, WA 98366). Light lunch will follow in the Fellowship Hall. The family asks that any contributions or gifts made in Chuck's honor be sent to First Christian Church will be given to various mission outreaches.

On Friday morning, August 18, beloved husband, father, grandpa and friend, Charles Edward Cookson, breathed his last and was transported into the arms of Jesus. We're sure his homecoming was marked with a big smile and warm hug. Both were... View Obituary & Service Information

The family of Charles Cookson created this Life Tributes page to make it easy to share your memories.