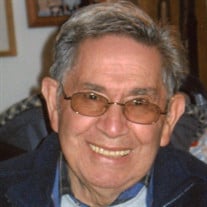 Charles LeRoy Simpson was born in Oklahoma City in Oklahoma on November 23, 1934, to parents Eva & Joseph Simpson, the ninth of nine children. He was raised in Oklahoma with his 4 brothers and 4 sisters. Growing up he followed his dad and also became a boxer. He was a track star running cross country and the mile and worked on a watermelon farm to help support his family. He graduated from Capital High School in 1953. After graduating, he decided to join the Navy and was stationed in San Diego on the USS Shangri-La (CVA-38). After he was released from active duty, he hitch-hiked from San Diego to Bremerton to start his new life. Shortly after that, he went to a dance at the Bremerton Masonic Temple, where he met Marlene. He said that she was the most beautiful girl he’d ever seen. They were married in 1955. Best hitch-hike ride ever. Charlie started his career as a meat cutter at Safeway in 1956 where he worked for 40+ years. Charlie enjoyed dancing and was a member of Kitsap Square Dance Association. He was also a member of St. Gabriel's Catholic Church in Port Orchard. He enjoyed being with family and hosting family BBQ’s at his and Marlene’s home, Sunday dinners. He had an undeniable love for chocolate chip cookies and Orange Crush sodas which were part of all the gatherings. He also hunting with his mother-in-law, was a proud Oklahoma Sooners fan, and loved baseball and being involved in Rick’s SK Western Little League teaching him to pitch and play the game with finesse. Charlie passed away peacefully due to complications of a stroke on August 18, 2021, at St Anthony’s Medical Center in Gig Harbor. He was preceded in death by his parents, wife Marlene, sisters Mary, Thelma, Genevieve, Loretta; brothers Bennie and Leon, and his loving companion Peggy. Charlie is survived by his stepson, Rick Aquino (Sherri), brothers Casper (100 years old) & Raymond (97 years old), grandchildren Rebecca, Mikel, and Jeffrey, 7 great grandchildren (one more on the way next month), and several nieces and nephews. It is difficult to express the gratitude for all those that touched Charlie’s life and helped during his waning years. The family would however, especially like to thank Brother-in-law Jack, nephew Anthony Aquino, as well as Dr. Gretch and his staff. Interment will be Tuesday, August 31 at 10:00 a.m. at Sunset Lane Cemetery and will be followed with a memorial service at Rill Chapel in Port Orchard, WA. In Lieu of flowers, please consider donating to the Alzheimer's Foundation www.alzfdn.org or any other such organization to help fight Dementia and Alzheimer's in Charlie's name.

Charles LeRoy Simpson was born in Oklahoma City in Oklahoma on November 23, 1934, to parents Eva & Joseph Simpson, the ninth of nine children. He was raised in Oklahoma with his 4 brothers and 4 sisters. Growing up he followed his dad and... View Obituary & Service Information

The family of Charles Simpson created this Life Tributes page to make it easy to share your memories.