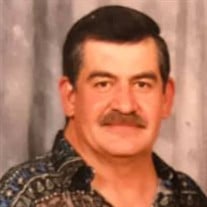 Charles ‘Chucky’ Andrew Thompson was born in Bremerton, Washington on August 27, 1950 to Robert Nickolas and Evelyn Mae (Cloquet) Thompson, Sr. He spent his childhood in Silverdale, Washington where he attended schools in the Central Kitsap School District. After high school he joined the United Sates Marine Corps and later went to work for West Park Low Income Housing and then at Puget Sound Naval Shipyard where he worked on the railroad system. He spent a great deal of time as a Chef, which was what he enjoyed doing more than anything else as far as working life was concerned. He was a member of the Cowlitz Indian tribe where he served as a tribal Elder. He later met Danielle ‘Danny’ Barr and they were married in 1996. He loved going out on the beach and going crabbing at Westport. He also enjoyed gathering and cooking oysters. Other ways to take respite for him were clamming, going in the woods, camping at Dewatto, and just being outdoors. He also really enjoyed spending time with family. Chucky also loved cooking and gardening, making flower pots out of old wheelbarrows, ,and searching for glass balls on the beach. His favorite two places to spend time were either at home or on the beach at the ocean. His favorite color was green, his favorite music consisted of the song Amazing Grace, Country and Rock and Roll music, and especially the Doors. Chucky passed away on the 13th of August while at home with loved ones. He was predeceased in death by his dog, Fred. He is survived by his loving wife, Danielle ‘Danny’ Thompson and his dog Lily; sons Andrew and Brian; siblings, Bob, Kathy, Elizabeth, Alma, Esther, Dixie and Kerry, as well as many nieces, nephews, and cousins. There will be a celebration of his life Friday, August 23rd, noon to 4:00 pm at Twanoh State Park in Union

Charles &#8216;Chucky&#8217; Andrew Thompson was born in Bremerton, Washington on August 27, 1950 to Robert Nickolas and Evelyn Mae (Cloquet) Thompson, Sr. He spent his childhood in Silverdale, Washington where he attended schools in the Central... View Obituary & Service Information

The family of Charles 'Chucky' Andrew Thompson created this Life Tributes page to make it easy to share your memories.