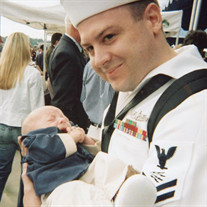 Clayton was born in Lowell, MI to Roger and Cynthia (Makarewicz) Covell on February 26, 1977, during one of their worst blizzards. He always had above average intelligence showing up when he graduated from St. Patrick’s Elementary School, awarded highest honors. He received Academic Society honors from Mr. Write for improving lab performance and overall functionality at Lowell High School and. Ms. Somers, his CPU101 teacher, suggested he become a programmer. After high school he was awarded both an athletic scholarship to Tri-State University football program and an academic scholarship based on his ACT score (29). He was a member of the Tau Kappa Epsilon fraternity. Received Alumni Gold Key Membership Award based on GPA status. Clayton joined the Navy shortly after the tragedy of 9/11. He attended IT Training in San Diego. He was subsequently stationed on board the USS John C. Stennis and after working there for about a year, met his future wife Lisa, when she reported for duty on the Stennis as well. They were married a few years later, after two deployments (both Clayton’s and Lisa’s) and welcoming their son Caleb. He enjoyed traveling around together as a family. Exploring local parks, hiking, and swimming. On many summer evenings, we would load up and head to the Rodeo Drive-In movie theater. His favorite sports teams were the Detroit Lions and Michigan University. He’d unfortunately get disappointed by the Lions often and would joke by half-time every game, if they happen to be winning, “They’ll find a way to lose.” He would still proudly wear his Sanders Lions Jersey and Lions gear to work and out in town. Clayton was so smart. He knew something about almost every topic. Especially Science. He fostered a love of Science in the boys, who love to watch science programs and learned so much from his Dad. His dad could also cook the best Mac and Cheese and he was the the “grill master” and built awesome bonfires, too, for s’mores. We were able to meet awesome new fur friends together as well. Clayton loved brushing his favorite feline Kitty Lenore. And this past Summer we welcomed our puppy Alfie. Clayton and Alfie were best friends. Clayton walked in a PETSWALK Kitsap Humane Society fundraiser on the waterfront of Poulsbo with Alfie and us. Clayton loved his entire family and all his friends. Sadly, and unexpectedly soon, he went back into the hands of our loving and merciful God on December 11th. He will be so dearly missed.

Clayton was born in Lowell, MI to Roger and Cynthia (Makarewicz) Covell on February 26, 1977, during one of their worst blizzards. He always had above average intelligence showing up when he graduated from St. Patrick&#8217;s Elementary School,... View Obituary & Service Information

The family of Clayton John Covell created this Life Tributes page to make it easy to share your memories.

Clayton was born in Lowell, MI to Roger and Cynthia (Makarewicz)...