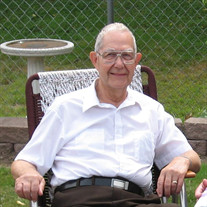 Dale Richard Morrison was called home to heaven by his Lord on December 14, 2019 in Bremerton, Washington. Born to Wendell "Jack" and Pearl Morrison on September 9, 1928 in La Crosse, Wisconsin, his family moved to Port Orchard in 1944. He attended South Kitsap High School and met Dorothy at True Value Grocery, where they both worked. Dale enlisted in the U.S. Army in 1946 and remained in active duty for two years, performing a portion of his service in Japan and attaining the rank of sergeant. On November 1, 1947, Dale and Dorothy were married at Bethany Lutheran. They settled in Port Orchard in 1948 while Dale was in the Army Reserves. He was confirmed and became a member of Bethany Lutheran in June of 1949. Having been recalled to active military duty, he served his country in Korea in 1951. Upon returning to Kitsap County, he began working at Safeway while he and Dorothy raised four sons. Following 25 years with Safeway, he worked at Coast to Coast Hardware, retiring as manager in the late 1980's. In his retirement, Dale enjoyed traveling with his wife, spending time with family, solving word puzzles, and model railroading. Dale was a strong supporter of his church and the Christian education provided by Bethany Lutheran, serving on the school board and in many other positions across many decades. Dale was preceded in death by his wife Dorothy, parents Jack and Pearl, and brother Donald. Celebrating Dale's triumph are sister Barbara (Walter) Lee of Bremerton, sister Eileen (Steve) Hanks of Port Orchard, children Dennis (Dolores), of Port Orchard, Doug (Kathy) of Utah, David and Darrell of Port Orchard, grandchildren Krystal (James) Cochran, Darren (Marlana), Derek, Dan (Sarah), Dwaine (Bethany), David (Neichel) Morrison, Jennifer Tomko, great-grandchildren Xander, Emma, Timothy, Molly, Nicholas, Jackson, Elijah, Jacob, and Daxton.

Dale Richard Morrison was called home to heaven by his Lord on December 14, 2019 in Bremerton, Washington. Born to Wendell "Jack" and Pearl Morrison on September 9, 1928 in La Crosse, Wisconsin, his family moved to Port Orchard in 1944. He... View Obituary & Service Information

The family of Dale Richard Morrison created this Life Tributes page to make it easy to share your memories.

Dale Richard Morrison was called home to heaven by his Lord on...