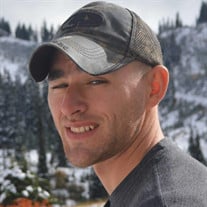 I had the privilege of knowing Dalton for only six short years. That time that went by way too fast. Life around him was full of fun and full of surprises. His smile was enchanting, contagious and above all genuine because Dalton was about as genuine a person as I’ve ever met. What you saw was what you got. The first time I met him, I was notably impressed that he gave me a firm but not overly hard handshake and looked me square in the eye. He made eye contact with me and made me feel that in that moment, I was important to him and nothing else. He made a lot of us feel that way through many other of his actions in life. He wanted to make people happy. He wanted to help and do important things for people that made a difference. He helped me around the house on lots of projects and his clever mind helped me figure out some solutions to some problems that I’d have never figured out on my own. Often, we’d be in a hectic state (many of you know how things can get around the Dougherty house sometimes) and we’d be trying to get everything together or get ready for an event and suddenly there’d be something we’d forgotten and we’d be in a panic. Dalton would just quietly announce that it was already taken care of because he’d been watching and just knew we’d need it taken care of and did it on his own. He had a very casual air about him and didn’t stress things. I guess he just felt things would get taken care of as they would and worrying about them wouldn’t help get them done any sooner. I know that I should take his advice on this one big time. He was good at his job too. People knew they could come to him for help. Combat Medics must be like this, and he was born for the job. He wasn’t squeamish and was ready for whatever challenges his job through at him. He just knew stuff. I was constantly impressed with the stuff he knew or the information he retained from his training. He was able to constructively think and use that what he’d learned in sometimes innovative ways. He could improvise very well and ultimately get the job done. Dalton was the go-to guy and the Army knew that. He took care of soldiers off duty too though. Lots of phone calls asking him for assistance or advice. He’d even offer his home to help someone out. He just lived to help people with his talents and intellect. He was a simple man though who took pleasure in very simple things. He didn’t require flash or extremely fancy. He appreciated it but never required it. He was satisfied with “casual and laid back”. What image comes to mind when you think of him? His well-worn baseball cap, a flannel shirt, old jeans, his signature cowboy boots and of course, that silly smile. He could dress up and looked mighty handsome and impressive when he did for the Army Ball or a wedding, but he was much more comfortable at a backyard BBQ in shorts and a tank top. That was Dalton. Just a simple, real man. He was a true outdoorsman. It didn’t even matter what the weather was. He was in his element in the outdoors. Camping, hunting, fishing, backyard BBQ’s, walking on the beach. This was his passion. Being outdoors was in his blood and he truly loved nature. I think he even appreciated some of the seemingly miserable Army exercises in the desert just because they immersed him in his beloved nature for days at a time. They were training, but little did the Army know that they were placing him in just the situations that Dalton thrived in. You might hear him complain about the cold, the wet or the dust but I truly think he was inwardly, very content at being in situations that satisfied his need for challenge and being immersed in the elements. We’d have parties at our house and one of our favorite activities was to play catch with a football. Nobody could out-pass Dalton with those long arms. He loved to jump up and steal the ball from whomever was just about to catch it. Many of us have simple but beautiful memories of Dalton like this. He was obviously a born joker and loved to laugh even if he was the brunt of the joke. We all know of instances where we laughed hysterically with Dalton. This is part of his charm, his magic. He could be very romantic and touching as well and those traits are passed along to his children, just ask Rachel. He knew how to be gentle and tender. Nobody was prouder than he was of his little family and he showed that openly and without reservation. He was proper and gently firm with his discipline of Liam but always eager to be a joyful playmate as well. He knew compassion and humility. He respected tradition and integrity. He always told the truth and was always clear and concise in sharing his thoughts and ideas. He appreciated quality but could be more than satisfied with the very simple. He was fiercely protective of his family and his home but open and generous to complete strangers that needed a friend. To say he was multi-faceted would be a gross understatement. I could stand here all day and speak of what Dalton was but in doing so I’d do exactly what he wouldn’t want me to do. He’d prefer that we quietly remember him and above all, be happy together. Let’s all remember this special man in our hearts by following his example in being kind, genuine and loving to each other and never forget that this is what he’d have wanted of us.

I had the privilege of knowing Dalton for only six short years. That time that went by way too fast. Life around him was full of fun and full of surprises. His smile was enchanting, contagious and above all genuine because Dalton was about... View Obituary & Service Information

The family of Dalton Crawford created this Life Tributes page to make it easy to share your memories.

I had the privilege of knowing Dalton for only six short years....