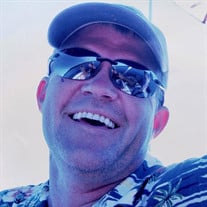 Darin Lee Haustveit, 58, of Port Orchard, WA passed away on June 8, 2020. Darin was born on July 14, 1961 in Williston, ND to Ernie and Fern Haustveit. He graduated from Mount Si High School Class of 1979. Darin’s happiness was spending time with his family and entertaining guests who made their way into the fray. He was a very proud Dad and Grandpa. Darin and his wife, Nancy, enjoyed traveling to numerous beaches around the world and getting sand caught between their toes. He was a lifelong boater and was very active in the Bremerton Yacht Club, he made it through the ranks to earn the title Commodore. Throughout the years they enjoyed many boating adventures around the Puget Sound area. Darin is survived by his wife, Nancy, of 31 years; daughter Tarra, married to Chris Moar, daughter Nicole, married to Kyle Roethle and son Conrad, married to Kristin; his grandchildren: Drew, Skylar and Maren; mother: Fern, married to Bill Schaefer; siblings : Bryan, JoDee and Brent; as well as numerous nieces, nephews, cousins and other family members. Darin is preceded in death by his father, Ernie, and son, Justin. Darin’s wishes were to be cremated and have his ashes scattered within Puget Sound. There will be no funeral service instead there will be a Celebration of Life at a later date.

The family of Darin Lee Haustveit created this Life Tributes page to make it easy to share your memories.