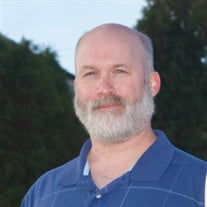 Darrell Scott Jones was born on June 1, 1964, in Bremerton, Washington. He grew up in the Kitsap County area and graduated from Olympic High School in 1982. He discovered his love of the theater in high school, playing the role of “Teddy” in OHS’s production of “Arsenic and Old Lace.” After high school, Darrell (Scott) went on to act and direct, as well as serve as stage manager, lighting designer, and production coordinator, in local community theater productions with companies including the Performing Arts Guild of South Kitsap (PAGSK), Bremerton Community Theater (BCT), and CSTOCK. He served on the PAGSK Board of Directors for eight years and worked on more than 75 shows during his 25+ years of involvement in community theater. In 1990, he won the Weaver Award for best light design for the PAGSK production of “The Sound of Music.” He also won a Weaver Award for his role as Officer Haggerty in “Nuts.” Darrell was an avid sports fan, particularly baseball and football, and loved attending Seattle Mariners games with his sister, Rebecca. He was also an active participant in the Lord of the Rings online game and was known for his creativity, his ability to make people laugh, and his kind and generous heart. Darrell loved classic movies, the Lord of the Rings trilogies, Star Wars, Star Trek, and Monty Python. Inspired by the Seattle Seahawks 2014 Super Bowl win (and a diagnosis of diabetes), Darrell committed to improving his health, which included running his first 5K ever – the Seahawks Run at the Landing in April 2014. He continued to participate in two of his favorite events, the Gig Harbor Turkey Trot and the WSCADV Refuse to Abuse 5K at Safeco Field. In 2010, Darrell undertook what he later described as his proudest accomplishment: participation in the Kitsap County Consolidated Housing Authority’s Mutual Self-Help Housing Program. Over the span of a year, Darrell and twelve other families committed to at least 30 hours per week to building their homes. Homeowners performed at least 16 of those hours, with the remainder performed by friend and family volunteers. As he wrote to U.S. Senator Patty Murray in defense of funding for the program, the USDA-sponsored program afforded him the opportunity of home ownership, something he never dreamed he could achieve. It was a community effort and Darrell and the other families (along with everyone’s volunteers) spent weekends working on each others’ homes (rain or shine) until move-in day in September 2011. Darrell worked for the same employer – Alliance One – for seventeen years and was a valued co-worker and friend to his work family. Prior to working for Alliance One, he worked for K2 and in the food service industry, having earned a Certificate of Proficiency in Commercial Cooking through Olympic College in 1987. Darrell passed away on September 21, 2017, after an unexpected medical emergency. He is survived by his mother Toby (Ray) Warren, his father Max (Lois) Jones, his sister Rebecca Jones, and his brother Ron Jones, as well as his uncles Harold Gibson and Demar Jones, and numerous cousins. A loyal and true friend, Darrell is also survived by his theater family, his work family, and his online family. A memorial/remembrance for Darrell will be held on Saturday, November 11, 2017, at 1 p.m., at the Bremerton Community Theatre, 599 Lebo Blvd., Bremerton, WA.

Darrell Scott Jones was born on June 1, 1964, in Bremerton, Washington. He grew up in the Kitsap County area and graduated from Olympic High School in 1982. He discovered his love of the theater in high school, playing the role of &#8220;Teddy&#8221;... View Obituary & Service Information

The family of Darrell Scott Jones created this Life Tributes page to make it easy to share your memories.