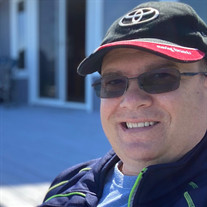 Darren William Hendrickson was born on August 4, 1962 in Bremerton, Washington to Charles and Patricia (Nida) Hendrickson. Darren spent his childhood as a military child. He lived in several states and countries that include Washington, Idaho, California, Guam, South Carolina, Greece, and Pennsylvania. He worked as a parts manager for Advantage Nissan. He was a Seahawks ticket holder since the 90s, an avid WSU sports fan, and a volunteer for the Jefferson County Sheriff’s Department. His most significant accomplishment was making good, lasting friends and giving others a laugh at every situation. Some of our fondest memories of Darren are: Grabbing his laser and driving the seagulls off the neighbors’ roofs. He even came back—after leaving in the morning for work—if he forgot it and needed to show those seagulls who was the boss. And, yes, pointing a laser at the seagulls’ feet really does shoo them off. And, sitting side by side in the front room watching the water while enjoying the life we were fortunate to have. And, each time, adding too many pellets to his outside fire pit and having to wait for the smoke to clear before he could enjoy the warmth and solitude by the water. He and his son took road trips to the places he had been to throughout his youth. With him, they explored locales like the Hoh Rainforest, Yellowstone, and Redwood National Park. He even took him to see the Vancouver Winter Olympic Games after his son said he wanted to see curling. Favorite Family Activities: Spending the day on the deck having a barbecue either by ourselves or with good friends. Going for long drives here on the peninsula; taking in the sights and enjoying outdoors. Movie night with the family. Some of his favorites included The Lord of the Rings trilogy, The Ten Commandments, and The Fifth Element Personal Activities: Loved to take long motorcycle rides around the back roads and shooting lots of photos. He enjoyed the coolest gadgets technology had to offer—always wanting the latest thing available. Can I just ask, has anyone not heard him talk about Starlink? Darren had a lifelong passion for music, striving to get the best sound system and sought-after rare album variants and obscure recordings of historic concerts. He grew up with tons of vinyl records and, once CDs took over he amassed a collection of thousands upon thousands of CDs. He loved progressive music, Classic Rock, and Christian Rock. Some of his favorite bands were Kansas, Toto, Alan Parsons Project, and Dream Theater. Favorite Places: Seahawks Tailgating His home on the water Anywhere he could ride his motorcycle. Some places he liked riding to were the Canadian Rockies, the redwood forests of California, and to his family in Idaho. Visiting family in Florida. Favorite Items: His seagull chasing lasers Ever-growing collection of baseball caps Memorabilia from his concerts Preceded in death: Patricia Nida Hendrickson (his mother) Survived By: Susan Hendrickson (his wife) Drew Hendrickson (his son) Charles Hendrickson (his father) Julie Hendrickson (his step-mom) Perry Hendrickson (his brother) Sandy Hendrickson (his sister-in-law) And, a large extended family and friends Main Missions in Life: To help others succeed with their goals while making them laugh as they excelled; To make everyone happy and to bridge conflict. In lieu of flowers, donations can be made to: Kitsap Rescue Mission or All Teens Matter

Darren William Hendrickson was born on August 4, 1962 in Bremerton, Washington to Charles and Patricia (Nida) Hendrickson. Darren spent his childhood as a military child. He lived in several states and countries that include Washington, Idaho,... View Obituary & Service Information

The family of Darren William Hendrickson created this Life Tributes page to make it easy to share your memories.

Darren William Hendrickson was born on August 4, 1962 in Bremerton,...