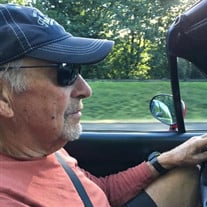 Born in Olalla, Washington on July 9th 1939, Dave was raised in Port Orchard and graduated from South Kitsap High School in 1957. “Tiny” as he was known then, met and married Shirley Topness and had two sons Michael and Mark. He made printing his trade, after being mentored by Cale Campbell at SKHS. After his divorce he travelled Europe where in England he met and married Carole Joynson. They returned to Seattle in 1969 where he continued working in printing, and eventually moved to sales of printing ink. They bought a house on Vashon in 1973, after having their daughter Beth. In 1978 they moved back to Port Orchard. Dave worked for Flint Ink selling newspaper ink until he retired in 2005. He was preceded in death by ex-wife Carole and his brother Chuck (Gaelynn) whom he considered his hero. In 2013 he convinced Judy Merchant to come for a music night at his house, and they have been together since. Over the years Dave had hobbies (and a joke for every occasion). He played the harmonica and took up playing music with friends all around the area. In his younger years, he restored antiques and antique cars. He was known for showing his restored 1931 Hupmobile Sedan. He spent his early 30s motorcycle camping, and later years boating, fishing, biking and camping all around the Pacific Northwest, northern Idaho and the San Juan Islands. With a first a 1977 Chris-Craft, then a 1968 Grand Banks and was a member of the Brownsville and Port Orchard Yacht Clubs. He restored a 1961 and 1955 Thunderbird, often showing up at car shows in the ‘55 towing the 1945 Teardrop trailer, his other passion. Much fun was had with Thunderbird and Teardrop enthusiasts. Finally, in the last few years he took to driving around the state at breakneck speeds in a red Miata, Judy by his side, saying “Life is Good”. Dave never missed a chance to talk to a stranger and make them a friend. He is survived by his love, Judy Merchant, his sons Michael and Mark and daughter Beth (Mike), grandsons Sam, Connor and Mark Jr. Sister Charlotte (Rodney), niece Charel, nephews Chris, Pat and Byron and many grand and great grand nieces and nephews. Due to COVID no services, but hopes for a future celebration of life.

Born in Olalla, Washington on July 9th 1939, Dave was raised in Port Orchard and graduated from South Kitsap High School in 1957. &#8220;Tiny&#8221; as he was known then, met and married Shirley Topness and had two sons Michael and Mark.... View Obituary & Service Information

The family of David Jack Demory created this Life Tributes page to make it easy to share your memories.