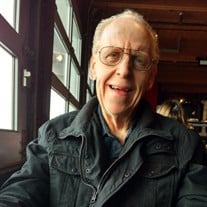 David Lamar Hill, 73, passed away peacefully at his Port Orchard residence on September 22, 2021 after a courageous eight year battle with Alzheimer’s Disease. He was born to Earl and Dora Hill in Blackfoot, ID on August 30, 1948. The family moved to Tacoma, WA in 1960 after the death of his father. He is preceded in death by his parents, three brothers and one sister. Dave graduated from Franklin Pierce High School in 1966 and Tacoma Vocational Technical Institute in 1969. In 1971 he completed his apprenticeship, and in 1973 he went to work at Puget Sound Naval Shipyard as an air conditioning and refrigeration mechanic and later as an instrument mechanic. In 1982 he became a Supervisor of the Antenna Facility at Trident Refit Facility, Submarine Base Bangor. In 1985 he was hired as an Engineering Technician at Naval Ships Systems Engineering Station (NAVSSES) in Philadelphia. He was assigned to Puget Sound Naval Shipyard as well as Mare Island Naval Shipyard in Vallejo, CA.. In 1998 he was reassigned to Pearl Harbor Navy Base and then in 2007 transferred to Norfolk Navy Base. In 2009 he returned to PSNS to finish out his career with Combat Systems. He retired in December 2014 after 42+ years as a civilian employee of the Department of the Navy. Dave’s extensive work travels took him to Italy, Scotland, Japan, Guam and Canada as well as all corners of the U.S.. His work files are filled with awards and certificates of special recognition he never spoke about because, in spite of his dedication to every job and his strong work ethic, he was above all a humble man who was more interested in others than himself. Dave and his wife Laura were married on May 1, 1976, and settled in Port Orchard, WA, where they raised their three children. They thoroughly enjoyed their nine years living in Kailua, Oahu, and two years living in Chesapeake, VA due to job transfers. They took advantage of being able to explore the East Coast from North Carolina to Maine, paying particular attention to historical sites. Dave excelled as a tour guide when friends and family came to visit no matter where they lived. He and his wife enjoyed their travels to Greece, Mexico, Canada and Alaska. To Dave, the most important elements of his life were his faith in Jesus, his family and his friends. In turn, his friends were unwavering in their support and care for him and his family throughout his journey with Alzheimer's. That was especially true during the last week of his life when friends gathered daily to uplift the family.. Over the years they had joined him in his quest to live life to the fullest. Dave loved the outdoors and enjoyed golfing, camping, hiking, hunting, fishing, Jeeping, dirt bike riding and exploring back roads. He was an avid reader and pinochle player. Memorizing long poems was a passion of his, and he will be remembered for his recitations around the campfire on camping trips. He is survived by his loving wife of 45 years, Laura, their daughter, Angela Grammatas (Lefteris), of Palo Alto, CA, their sons Aaron (Billie Feather) of Durham, NC, and Adam (Jenna), Seattle, and the four grandchildren he adored, Logan, Perry, Idalia and Clara. He is also survived by his sisters Daveen and Rayola, and his brother Kent. At his request, he was cremated and his ashes were released at North Head Lighthouse near Cape Disappointment State Park, the site of three generations of memorable family camping trips. A Celebration of Life was held in Dave's honor at the family home. Memorial donations can be made to Franciscan Foundation, PO Box 1502, Tacoma, WA 98401, or online at chifranciscan.org. Please note Hospice and Palliative Care.

David Lamar Hill, 73, passed away peacefully at his Port Orchard residence on September 22, 2021 after a courageous eight year battle with Alzheimer&#8217;s Disease. He was born to Earl and Dora Hill in Blackfoot, ID on August 30, 1948. The... View Obituary & Service Information

The family of David Lamar Hill created this Life Tributes page to make it easy to share your memories.

David Lamar Hill, 73, passed away peacefully at his Port Orchard...