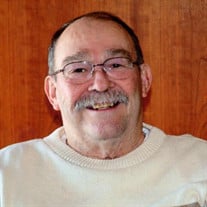 David was born at 10:30 AM on a Tuesday, September 17, 1935 in Shelton, Washington, the third of six children of Herbert E. Loop and Edna M. Loop (Young), both deceased. Raised in Shelton, he graduated from Irene S. Reed High School. Upon graduation he joined the U.S. Navy where he served as a radio operator during the Korean War aboard the U.S.S. Philippine Sea. Returning home from the service, he settled in Port Orchard, Washiington and enrolled in Olympic College. While at Olympic College he met and married Bonnie Knupp, who he shared his life with for 22 years. Upon graduating from Olympic College David and Bonnie moved to Bellingham where they attended Western Washington University. David majored in English Literature while at WWE. After college, David returned to the Kitsap and King County areas for employment. In 1968, he settled in for his life’s profession as a real estate agent with Park Shore Real Estate, Inc. in Port Orchard until he retired and moved to Pullman, WA in 1991 to be with his partner Sandi Carlton. While at Park Shore, later to become Coldwell Banker Park Shore Real Estate, David achieved numerous honors and designations. He was an Associate Broker, Manager, and Director for the company. He was a Graduate of the Washington Association of Realtors Realtor Institute and earned his Certified Residential Specialist designation and his Certificate in Real Estate. He was also a charter member of the Million Dollar Club and voted by his peers as the “Most Inspirational Sales Associate of the Year”. Being a long-time resident in his community, David served as President of the Port Orchard Lions Club, was a member of Port Orchard Lodge No. 98 of the Grand Lodge of Masons, and participated in “Youth Alliance Against Drugs”. After moving to Pullman, David worked for Pullman Transit and was selected the Washington State Transportation Employee of the Year. Moving back to Port Orchard in 1996, David went to work for Community Transit in Everett commuting from Port Ludlow where he lived with Sandi. Everywhere David went he made numerous friends. He loved his farm in Port Orchard where he raised every animal imaginable mostly for his nieces and nephews and all of his friend’s children. He was a kind, caring, entertaining fun-loving guy who loved to host functions for his family, friends, and co-workers. He loved to travel, enjoyed his annual fishing trips to Lake Hi-Hum in Canada, again, always with family and friends accompanying him. His other past times included cooking, reading, carpentry, and woodworking. He was fondly known as “Uncle David” to everyone. He never met a person that didn’t become his friend. In 2012, David was diagnosed with renal disease and lived out most of his remaining years at Martha and Mary Health Services in Poulsbo where he was loved by everyone. David was preceded in death by his parents, Herbert Enzo Loop and Edna May Loop (Young); two brothers and a sister-in-law, Dale Chris Loop (Nancy), Herbert Eugene Loop and Judy Loop; and family pet Rollo. Surviving is his partner Sandi Carlton and her two children, Thomas Keller (Crystal) and Kristi Keller and grandson Austin Keller; a sister Bess Olson (Norm) and two brothers Enzo Loop (Bev) and Wendell Loop, along with numerous nieces and nephews, additional extended family and long-time friends. Celebration of Life to be held in the Olympic Room at Gold Mountain Golf and Country Club on Saturday, September 18, 2021 at 1:00 p.m. Please refer to Kristi Keller's Facebook to RSVP for the memorial service. In lieu of flowers, donations can be made at his Celebration of Life to Martha and Mary Health Services. David’s family especially wishes to thank Martha and Mary, the Olympic Peninsula Kidney Center, and Dr. Namita Gill, all of who provided him with excellent care in his final years.

David was born at 10:30 AM on a Tuesday, September 17, 1935 in Shelton, Washington, the third of six children of Herbert E. Loop and Edna M. Loop (Young), both deceased. Raised in Shelton, he graduated from Irene S. Reed High School. Upon graduation... View Obituary & Service Information

The family of David Clayton Loop created this Life Tributes page to make it easy to share your memories.