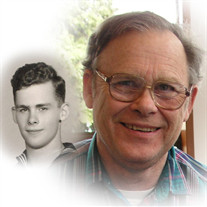 Dennis Ray Eley, 82, died peacefully on September 14, 2017, surrounded by family at Harrison Medical Center in Bremerton. Dennis was born on May 7, 1935 in San Diego, California to Lawson and Violet Eley, joining his older brother Ralph to complete the family. In 1939 they moved to Washington State, where they lived in Retsil before building the family home in Port Orchard in 1940. The family lived in Chicago, Boston and Nashville while Lawson was in the Navy, before settling once again in Port Orchard. Dennis graduated from South Kitsap High School in 1953 and then joined the US Navy. He married Ardiss Lorraine Ellingson in 1954, and they had three children. Dennis’ navy career took the family to California, Rhode Island, Illinois and Washington. He served on many ships: USS J.P. Kennedy, USS Hammerberg, USS Hancock, USS Hollister, USS Higbee, USS Picking, and USS Ponchatoula. His naval career spanned from 1953 to 1973, and he was decorated with medals from the Korean and Vietnam wars. Upon retirement from the Navy, Dennis went to work for the US postal service, quickly reaching the position of assistant postmaster at the Port Orchard post office. Dennis met and courted Marjorie Louise Kern for 28 days before they married on March 28, 1980. They enjoyed square dancing and traveling. Dennis retired in 1990 and went on to volunteer as a member of the Port Orchard Kiwanis club, where he served many years as treasurer and secretary. Dennis worked hard at all of their functions, including food drives, the yearly cancer walk and the Cruz car show in downtown Port Orchard. He volunteered for the Port Orchard farmers market, his step-daughter’s bakery in Gig Harbor, and always gave assistance readily to those in need, friend, family, or those he just met. His word was his bond, and if he couldn’t be somewhere on time, he didn’t want to go. He enjoyed listening to music and had a corny sense of humor. The perpetual joke between Dennis and his brother Ralph was about their fictional sister. In recent years, Dennis greatly enjoyed being at home and walking through the woods on his property. He was famous for his holiday roasts. He always enjoyed having a dog and had many through the years. For the past several years Dennis attended Peninsula Bible Fellowship, and especially enjoyed singing along with the music. Alzheimer’s disease created a long goodbye for those who loved him. Dennis is survived by his wife (who was his queen) Marjorie Eley, brother Ralph Eley (Patricia), children: Kathleen Eley Wright (Bob), Sharon James (Larry), and Jim Eley (Rowena); step-children: Sherry Williams, Robert Kern and Kathleen Chapman (Bob). He also leaves behind grandchildren: Tim Eley, Ryan James (Brynn), Jordan Eley (Alysia), Kyle James, Bryce James, Eric Eley, Rhianna Meadows and Autumn Eley, and two great-grandchildren: Piper James and Trulee James. He was predeceased by his parents and his grandson Brent Bayliffe. A private celebration of life will be held at a later date.

The family of Dennis Ray Eley created this Life Tributes page to make it easy to share your memories.