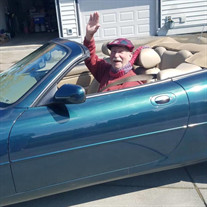 Dennis George Harris (Denny) was born in Culver City, California on November 24th, 1941. He moved to Bremerton, Washington in 1947; where he lived through his graduation from West High in Bremerton in 1960. Shortly thereafter he joined the United States Army Air Force. Dennis was part of the first 10,000 volunteer military advisory force to Vietnam (1st MOB, 1960); serving as a USAF Air-traffic Controller. Here he spent 2+ years deployed to Vietnam and the Philippines; making life-long friendships, and having a host of experiences. He witnessed the Dinh Bein Coup of 1963 After returning home from his service, Dennis went on to enter civilian aviation as an Air Traffic Controller - first in California and then moved back to Washington State. He married his first wife Carol (1964-1982), and had three children with her (Jennifer, Tracy, & Eric) He was a ringleader of the 1981 PATCO Air Traffic Controllers Strike, and subsequently left the Air Traffic Control industry, eventually moving onto pest elimination. He met and married Karen in 1982, remaining married until his passing. In 2014, Dennis officially adopted Jason as his son. In mid-2020 Dennis was diagnosed with small cell lung cancer, and passed February 7th, 2021. He was preceded in death by his parents ( Robert & Almeda Harris, his step-son (Douglas Stiles), and daughter-in-law (Lisa Harris). He is survived by his wife Karen; his children Jennifer (Paul) Zohn, Tracy (Jennelle) Harris, Eric Harris (Dianne), and Jason (Sarah) Harris, Glen Stiles (Step-Son), and his numerous grandchildren. He valued his family, music, travel, talking, cars, and model trains. His favorite saying was "Close Enough for Government Work!" He could be found either on the couch or the deck of his home watching the comings and goings of the bay. He enjoyed listening to music, planning out his model train set, and driving his beloved Jag. In his last years he and Karen traveled to the British Isles and to Disney World; while enjoying holidays with family. He enjoyed talking about his experiences and his views on the world, culture, mechanics/wood working, and history - as well as the odd game of shuffleboard. He was admired and appreciated as the man he was, the collections of opinions, thoughts and memories; as well as the big heart that took so many into it. We love you, Denny, and miss your presence in our lives.

Dennis George Harris (Denny) was born in Culver City, California on November 24th, 1941. He moved to Bremerton, Washington in 1947; where he lived through his graduation from West High in Bremerton in 1960. Shortly thereafter he joined the... View Obituary & Service Information

The family of Dennis George Harris created this Life Tributes page to make it easy to share your memories.