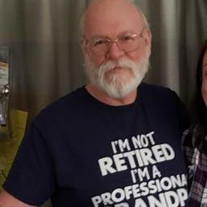 The Story of My Life… Dennis Pattee Born in Appleton, Wisconsin on November 27, 1952. He spent his childhood mainly in Wisconsin and the Southern Oregon coast (Myrtle Point). After graduating high school, he attended Oregon Technical Institute, obtaining an associate degree. In order to fund the final two years of schooling, he joined the Navy for six years. He returned to the same college, now called Oregon Institute of Technology, to complete his bachelor’s degree in civil engineering. He met his wife, Annette, while he was a senior and she was a freshman, proposed two weeks later, married within four months and lived happily together until his recent passing. After graduation, civil engineering jobs were in short supply. So, he applied at Puget Sound Naval Shipyard and was hired as an assistant shift test engineer. He spent over 30 years as a shift test engineer, working in Code 2340. He retired in March of 2019. He mentioned many times that he missed the people he worked with, but not the bureaucracy. He would often come home with tales of the accomplishments of his younger co-workers. It made him very happy to see them succeed and to attain life goals – promotions, marriages, and most especially, new babies. Dennis’s early years were often difficult. As a teenager, he made a decision that his life was an adult would not follow the same path; that he would have a stable life and that his future family would be taken care of. He worked hard to achieve those goals. He always put his family before himself. His fondest memories wee all the silly, unexpected things (a cold nose on his chest; our oldest yelling 3, 3, 3 when she wanted us to swing her between us; our youngest helping him put the roof on the garage, hitting her thumb with the hammer and him giving her permission to swear, because he knew how much that hurt). All the kids that were in and out of our house throughout the years. He enjoyed having everyone over for barbeques, laughing and goofing around with the little ones. He was looking forward to spending time fishing, crabbing and eventually building a model railroad with all the grandkids. Unfortunately, he became sick before most of this could come to fruition. He enjoyed painting his 15mm Napoleonic figurines (and had hoped to eventually start playing games again). He also spent a lot of time painting buildings for a model railroad layout and coming up with different designs and ways that the kids could play with it, without destroying it. He was preceded in death by his parents, Dean Pattee and Delores Hitner, his brother Darrell Pattee and sister Debra Welch. He is survived by his loving wife, Annette; daughters Laneya Pattee-Higuera (Steve), Holly Pattee (Ian Ramos); and grandchildren Sophie Higuera, Isabella Higuera, Taylor Higuera, Brooke Higuera, McKenzie Ramos and Lukas Owens. He is also survived by sisters, Darlene Pattee, Donna Kirby, Deann Davis and brother, Donald Pattee. Please be advised that COVID19 Restrictions are in place: Masks are required and social distancing is to be observed. Currently Kitsap County is limited to 30 people at Graveside gatherings.

The Story of My Life&#8230; Dennis Pattee Born in Appleton, Wisconsin on November 27, 1952. He spent his childhood mainly in Wisconsin and the Southern Oregon coast (Myrtle Point). After graduating high school, he attended Oregon Technical... View Obituary & Service Information

The family of Dennis Harold Pattee created this Life Tributes page to make it easy to share your memories.

The Story of My Life… Dennis Pattee