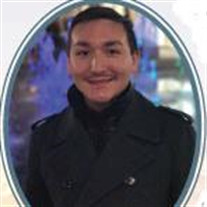 On Wednesday, February 13, 2019, Devin Robert (Sherman) Riley, beloved husband, son, brother and grandson; passed away suddenly at 26 years of age in Naples, Italy. Devin will be forever remembered by his husband and best friend Ryan, by his parents Wanda Healey (Patrick) and Jason Sherman, by his brother Destin Sherman, and his beloved paternal grandparents Roger and Cheryl Putnam. Devin touched many lives and will be forever missed by his in-laws, uncles, nieces, nephews, extended family, dear friends and every heart he enriches with his infectious love. Devin was born in Longview, Washington and spent most of his life living in Kelso, Washington and the Kitsap County, Washington areas. Devin graduated early from Kelso High School. He met his husband, Ryan, in Silverdale, Washington and together they were stationed in San Diego and Naples, Italy. Devin's giving heart led him to help establish the USS America's Family Readiness Group (FRG). He was a member of The American Military Partnership Association; the Pacific NW, Southern California and Italy Chapters. He also volunteered with the USO and organized outings for the Outserve Pacific NW Chapter. As a Navy spouse, Devin welcomed military spouses arriving to the new assignments, and hosted Sailors on any given Holiday who had no where to go to celebrate. Devin volunteered at Feed the Watch - providing meals for Sailors that had to work on holidays; and while stationed in San Diego, Devin tutored local ESL children. In honor of his dear friend Jeff, Devin enjoyed to participate in the "Walk For Life" to help promote Suicide Prevention programs. Other organizations he volunteered at were Soles for Souls (shoe drive) and Giving Tree. A Celebration of Life ceremony will be held March 9, 2019 at Rill's Life Tribute Center in Port Orchard, Washington at 2 pm. Devin will be laid to resr on march 11th at 11:30 am at Claquato Cemetery in Chehalis, Washington, with a reception or celebration of Devin's life following at St. Timothy's Parish Hall in Chehalis. In lieu of flowers, please donate to either the USO, the Navy Marine Core Relief Society, Pride Foundation and/or the Lambert House in Devin's honor.

On Wednesday, February 13, 2019, Devin Robert (Sherman) Riley, beloved husband, son, brother and grandson; passed away suddenly at 26 years of age in Naples, Italy. Devin will be forever remembered by his husband and best friend Ryan, by his... View Obituary & Service Information

The family of Devin Robert (Sherman) Riley created this Life Tributes page to make it easy to share your memories.