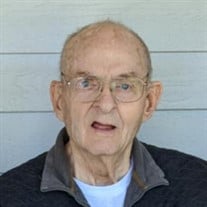 DeWitt Alson “Nick” VanderStaay, 85, died peacefully in his home on July 19th. Family and friends are invited to share memories and to celebrate Nick’s life Monday August 3rd at 1 p.m. via a virtual memorial tribute. Details to follow. Nick was born October 4, 1934 to Arie Jan VanderStaay, a Dutch immigrant, and Celeste (Weber) VanderStaay, in Plainfield, New Jersey. He moved with his parents and brother Allen to Kitsap County at age 6 and attended South Kitsap High School. In 1956 Nick married his high-school sweetheart, Amelia “June” (Bemp); the VanderStaays were married for 64 years and lived briefly in Ellensburg, where Nick attended Central Washington University, and then Tacoma, before returning to Port Orchard for the remainder of his life. Nick had a long and varied career as a realtor, developer and entrepreneur. Nick said he learned best by accident and a happy accident put him at the start of his real estate career just as new homes came on the market in Parkwood. Running open houses in the Parkwood community over several months, Nick met dozens of people, some of whom became his closest friends and dearest clients; people he worked and remained in contact with for the rest of his life. Nick founded his first company with partner, Dick Jacobson. Dick’s young daughter suggested they name their company “Spot” and Nick agreed, saying it would be easy to remember; “Spot Realty” was born and continues today in Gig Harbor. Nick founded several other companies, including Nick VanderStaay Real Estate and Kitsap Property Management. He also partnered with others as a developer and contractor, building homes and small subdivisions, including Bransonwood and Carmae Terrace both in Port Orchard. Together, with other South Kitsap partners, Nick helped to create the First National Bank of Port Orchard. After viewing a draft design of the bank, Nick said he wanted the building to dramatically showcase a large American Flag. This feature was added to the design and Nick raised money for the 600 square-foot flag, one of the largest in the region. The First National Bank of Port Orchard was later purchased by Wells Fargo, which retained responsibility over the large, well-lit flag. In his last years, Nick said that seeing the flag flying proudly brought him more pride than all other professional achievements. Nick believed in giving back to the community that supported him. He was a longstanding volunteer, board member and contributor to numerous civic and charitable organizations, including South Kitsap Helpline, the Alameda Emergency Family Shelter, the Lippert Transitional Family shelter, Kitsap Eastern Little League, Port Orchard United Methodist Church, the Port Orchard Downtown Citizen’s Group, and the Boy Scouts. Nick sponsored Port Orchard's first girls’ softball team and actively campaigned for the passage of South Kitsap School levies. He climbed Mt. Rainier to raise money for world hunger in 1986 and was voted Port Orchard Man of the Year in 1995. Nick practiced what he called “positive Christianity” believing that people are good at heart and trustworthy if given a chance. He was characteristically hopeful, loved life, humor, was bighearted and optimistic. Nick followed in his mother’s footsteps and was a life-long member of the Port Orchard United Methodist Church. Nick never missed reading the daily comics which he called the “funnies”, he enjoyed the outdoors, hunting, fishing, competitive race-walking, mountain climbing, and tinkering in his garage. He and June loved snowmobiling and took several adventurous trips, including a memorable winter trek across Yellowstone National park. In the later years Nick enjoyed vacationing in the 5th wheel, watching Seattle Mariner pre-season games in Peoria Arizona, and following the Seattle Seahawks. The most joy came from watching the grandchildren’s sporting events, interacting with each other and simply being together as a family. Nick is survived by his wife June and their three children: Darla (VanderStaay) Peacock of Bremerton, Scott VanderStaay (Bonnie) of Port Orchard, and Steven VanderStaay (Mary Metzger) of Bellingham. Seven grandchildren: Stephanie, Christina, Kevin, Jessica, Lily, Arie and Kory and three great-grandchildren: Keely, London and Saylor. In lieu of flowers, donations may be sent to South Kitsap Helpline. The family of Nick VanderStaay is inviting you to a virtual memorial celebration for Nick. Topic: Nick VanderStaay Memorial Time: Aug 3, 2020 1:00 PM Pacific Time, please log in by 12:50. To Join by Computer: https://us02web.zoom.us/j/3603335555 Meeting ID: 360 333 5555 To Dial in by Phone: Phone Number: 1 (253) 215 8782 Passcode: 360 333 5555# One tap mobile: +33170372246,,3603335555# Sincerely, The VanderStaay Family

The family of Dewitt Alson VanderStaay created this Life Tributes page to make it easy to share your memories.