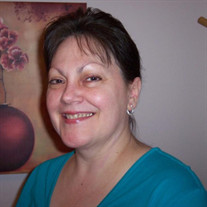 Diana Lorraine (Garstang) Bukosky, 66, (1955 - 2021), of Bremerton, WA died October 15, 2021 at St. Michaels Hospital in Silverdale WA from complications associated with her Diabetes, Liver and Heart Diseases. Diana was born to Richard and Eleanor Garstang on May 6, 1955 in West Covina, CA. Her family lived in southern California throughout Diana's childhood and she graduated from Santa Barbara High School in 1973. A resident of Kitsap County for 35 years, Diana was a cherished wife, mother, sister, daughter, granddaughter and friend. Diana loved her home with a view of Ostrich Bay where she spent the past two years completing many home improvement projects along with her husband Rick. She loved to sing with her Sweet Adeline quartet, laugh with friends, watch mystery movies and hike in the Olympic National Forests. Diana was very proud of her daughter Stefanie, and called her the greatest achievement of her life. Diana will be deeply missed by all who knew her. Diana's adult life started shortly after high school when she joined the army and became an army nurse. Stationed at Fort Lewis, she fell in love with the Puget Sound Area. Upon Leaving the army she worked as co-director of Bremerton's Weight Loss Clinic. Diana met her husband Rick in San Diego while she was attending school and he was attending Navy schools. They married in 1984 and lived briefly in Newport News, VA before they moved to Kitsap County in 1986. Diana attended Port Townsend School of Massage and upon receiving her credentials ran a successful body work practice for more than ten years until retirement due to her failing health. Diana is survived by her husband of 37 years, Rick Bukosky, daughter Stefanie Bukosky, sister Linda (Garstang) Solario, brother David Garstang of San Diego, and numerous nieces, cousins, and extended family members. Arrangements are through Rill Funeral Chapel of Port Orchard. A viewing will take place at Rill Chapel (1151 Mitchell Ave, Port Orchard, WA 98366) on Tuesday, October 19th at 11:00am. Diana wished that everyone would be mindful of her passing and contribute what they could to their favorite charity.

The family of Diana Lorraine Bukosky created this Life Tributes page to make it easy to share your memories.