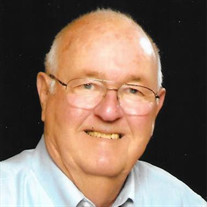 Don Cadigan passed away peacefully Friday, March 23, 2018 at the age of 79 with his wife Carol and oldest daughter Cathy Colescott by his side. Don is survived by Carol, his wife of 56 years, his son Richard (Jackie) Cadigan of Seaside, CA, daughter Cathy (Jeff) Colescott of Port Orchard, WA, and daughter Susie Whitley of Palm Desert, CA. As well as seven grandchildren and one great-grandchild; Blake (Alison) Cadigan and Kyle (Michelle) Cadigan and son Timothy, Sarah, Elizabeth and Matthew Colescott, and Nicholas and Kaitlyn Weycker. Don was born May 15, 1938 to Dorothy and Emmett Cadigan in Oakland, CA. The oldest of four children, Don grew up in Berkeley, CA with two brothers, Tom and Terry and one sister Marilyn. Don is preceded in death by both his parents and sister Marilyn Cadigan. During the 1950’s, Don spent many summers at the family's “river” house in Monte Rio, CA. After graduating from Berkeley High School, Don went to work for the Southern Pacific Railroad as a locomotive fireman where he worked until he graduated from Oakland City College in 1959. While attending college Don met his future wife Carol. Don joined the U.S. Army Reserve in March, 1960 and spent two months of basic training at Fort Ord, located in Seaside, CA. Don spent an additional four months at the Army Security Agency School in Fort Devens, MA. After being released from his six months of active duty in September, 1960, Don returned back to the Bay Area, assigned to the 325th U.S. Army Security Agency Battalion. Don went to work for Richfield Oil Company as an office clerk. Carol and Don were married in Oakland on September 16, 1961. While honeymooning in Las Vegas, Don and Carol read in the newspaper that his Army Reserve unit was being recalled to active duty due to the construction of the Berlin Wall. Carol and Don immediately returned to Oakland to prepare for their cross county move to Fort Devens, MA. After spending approximately one year on active duty, Don and Carol returned to Oakland where Don returned to his job with Richfield Oil Company. Don became a retail sales representative for Richfield in1964 and was transferred to Sacramento, CA. In 1965 Don found his calling when he was hired by the City of Sunnyvale as a Public Safety Officer. During his employment with Sunnyvale, Don served as both a firefighter and police officer. Don was with Sunnyvale for six years when it became apparent that he preferred fighting fires better than arresting criminals and giving tickets. Living in San Jose since 1966 with two children, Richard and Cathy, and Carol pregnant with Susie, Don was hired by the Palm Springs, CA Fire Department in 1971. Don was promoted to fire engineer in 1972 and fire captain in 1974. While working, Don commuted to California State University Los Angeles for over two years earning his Bachelor’s Degree in Fire Protection Administration in 1977. After earning his degree, he taught fire science courses at College of the Desert on a part time basis. In 1985, Don was promoted to Division Chief. This position was later changed to Assistant Fire Chief. Don retired as Assistant Chief of the 65 man department on February 15, 1991. He and Carol then embarked on seeing the world. This included dozens of cruises and visits to all seven continents. In 2011 Don and Carol became snowbirds. They purchased a waterfront condo in Bremerton, Washington, spending the summers enjoying the wonderful Pacific Northwest weather. They soon realized they wanted to make Washington their permanent home. After 43 years in the desert they sold their home, as well as their condo in Bremerton, and moved to Port Orchard, Washington near their oldest daughter, Cathy and family. Don enjoyed his last years traveling, gardening in real soil, not sand, watching deer eat his plants, and listening to Carol get excited over rain and snow.

Don Cadigan passed away peacefully Friday, March 23, 2018 at the age of 79 with his wife Carol and oldest daughter Cathy Colescott by his side. Don is survived by Carol, his wife of 56 years, his son Richard (Jackie) Cadigan of Seaside, CA,... View Obituary & Service Information

The family of Donald Emmett Cadigan created this Life Tributes page to make it easy to share your memories.