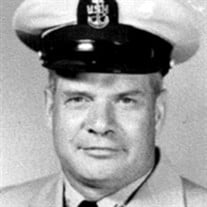 Donald Middleton Justus, ADCS, USN, Retired Donald Middleton Justus was born November 7, 1926 in Indianapolis, Indiana to Reuben Runyon and Jesse (Middleton) Justus. After leaving high school he joined the United States Navy where he served honorably for 24 years achieving the rank of Senior Chief Petty Officer. Donald was active duty during WWII, Korea, and Vietnam. receiving awards from all theaters. He received the WWII Victory Medal, Navy Occupation Medal for Europe, European-African- Middle Eastern Campaign Medal and the Vietnam Service Medal to name a few. He was best known for being active, honorable, patriotic, loving and courageous. There was one time when it was perhaps a bit more difficult for him to be loving and kind, but he managed anyway. It seems that before Don went into the Navy, he took the Model T that belonged to the family that raised him and put it up on cinder blocks and left it in their garage. He also left his box of baseball cards (Ty Cobb, Babe Ruth and more). When he came back from boot camp, he couldn’t wait to take the car out for a ride. When he opened the garage door the car was gone. When he asked his “Grandmother” what had happened she replied that a “nice man” offered her $50 dollars so she sold it to him and gave him his cards as well. Navy Chiefs are noted for having opinions and generally, no one tried to refute them rather they tried to find ways to agree with them. Don was part of the group that went looking for the Navy Squadron that got lost in the Bermuda triangle. He never believed in the Bermuda Triangle and I don’t think I should repeat what he said about the leader of the squadron and why he thought they got lost. On his last tour of duty on the USS Kearsarge, a young officer was explaining to the new sailors how to evacuate the ship if it started sinking. The very proud officer looked at Don when he was finished and said “Isn’t that right Senior Chief”. Don shrugged his shoulders and said “Nah... I would wait until the flight deck was parallel to the water and walk off.” Needless to say, he got in trouble for that. His 24 years in the Navy and subsequent 13 years working in civil service as a coordinator all over the world for military aircraft repairs were huge accomplishments in his life. The next on the list was that he met Miyoko Nakama while in Okinawa, Japan. She was working in the chief’s quarters as a housekeeper and he invited her to the CPO Club for a drink and the rest is history as on April 25, 1968 they were married. Another major accomplishment after he retired from the Navy was that he received an associate degree from Olympic College. He would also tell you that being able to be around to play with his grandchildren was big. A fond memory building exercise among most sailors was the fact that you get to see a lot of places around the world and between his civil service career and Navy careers, he did just that. When Bobbie was in the 4th grade her teacher told her class a joke a joke that they had to go home and tell their fathers. The joke was “Dad...have you ever been to Egypt? The Dad would say no and then you say where did you get Mummy from?” Well she went home and asked Don the question he said “Well...in 1944.” he ruined the joke. He enjoyed playing Santa Claus for the Grandkids and he OVER DID IT EVERY YEAR. Teaching his daughter, wife and son-in-law how to play golf, teaching his daughter and granddaughter softball, being the “red school bus” for his granddaughter, taking his grandson on a birthday “joy ride” (took him to different stores to buy his gifts and then ended at the Family pancake house). Watching his grandkids play softball, football, baseball and soccer. Golf was a big part of his life... To say that he played is a bit of an understatement. When he decided there weren’t the right kind of clubs on the market, he began making his own. Then he built a shed were he made clubs for whoever wanted them. He played on the men’s league at Clover Valley golf course. He was even the treasurer or something at one point. He even took time out to play cards with his friends. Other favorite things were Country Western Music (the old stuff!) Johnny Cash, Willie Nelson, Loretta Lynn. Two of his favorite sayings were: “Who’s the father and Who’s the daughter”. When Bobbie would say snow was pretty, he would say “Pretty Ugly and Pretty up to stay that way.” He loved his dogs! When he was younger, he had a German Shepard named Duke. One day Don spent all morning building a 6-foot fence. He sat down to enjoy a beer and his handy work. As he sat drinking his beer, he watched both boys jump over the fence and the dog behind them. When one of the boys got stuck in mud Duke brought his shoes back to Don to let him know he was stuck in Mud. He also had a German Shepard named Lucky in Okinawa and his last little buddy was a Shi-Tzu named Chief. On August 26th, he crossed the bar and went back into the hands of the Master Pilot. He will be greatly missed by those that knew and loved him. He is survived by his loving wife of 51 years Miyoko; daughter Bobbie Young (David); Sons Donald Justus JR, and Robert Justus; and sister Mary Virginia Cook.

The family of Donald Middleton Justus created this Life Tributes page to make it easy to share your memories.