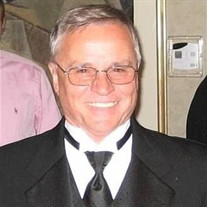 Donald “Jim” James Roberts passed away January 12, 2020, in the loving arms of his family. He died of complications from multifocal glioblastoma. His fight with cancer was mercifully and mercilessly short. A memorial will be held Monday, January 20, 2020, at 10:00 a.m. at Rill Chapel’s Life Tribute Center in Port Orchard, Washington. A reception will follow at the family’s home. Jim was born in Sunnyside, Washington, on September 1, 1946. He grew up on a farm in Grandview, Washington, where his family raised grapes for Welch’s juices, jams, and jellies. The youngest of four siblings and the only boy, Jim enjoyed a special place in his mother’s heart. His mother, Vera Bridges Roberts, taught him to cook, sew, garden, hunt, and even rebuild the engine of his first car. Jim was an avid outdoor enthusiast and loved animals of all kinds, a by-product of his childhood. He never met a stray animal he didn’t bring home – mostly unannounced, much to the dismay of his wife. Jim graduated from Grandview High School in 1964, where he was a member of the FFA. He enlisted in the Navy shortly thereafter. A Machinist’s Mate in the Navy during the Vietnam War, Jim served his country with pride. Jim was passionate about veterans’ issues. He was particularly sensitive to the unmet mental health needs of Vietnam veterans. Jim was honorably discharged from the Navy in 1967 and enlisted in the Coast Guard in 1972. He would serve in the Coast Guard Reserves until the time of his discharge in the 1990s. The military offered Jim the opportunity to travel the world. His service led him to Port Angeles, Washington, where he met his future wife, Monica Parmele Roberts, on a double date that worked out well for Jim and Monica, but less so for their intended dates. Jim and Monica wed in Vancouver, Washington, on June 11, 1974, en route to an assignment at the Coast Guard Training Center in Alameda, California. Their first daughter, Kristin Michelle Roberts, was born in 1978, adding to their family, which already included Jim’s children from a prior relationship, Tony and Shona Watson. As Jim transitioned from active duty to the reserves, the family moved to Portland, Oregon, where Jim was employed as a refrigeration mechanic with Thermo King. Their youngest daughter, Kimberlee Brianne (Roberts) Curtiss, was born in 1981. The family moved to Port Orchard, Washington, in 1982, where Jim accepted employment with the Puget Sound Naval Shipyard. He worked as a nuclear inspector in the shipyard until his retirement in 2007. Jim took enormous pride in his work, but was occasionally known to have liberated a stapler or two from his employer in the service of his children’s homework. Jim was a devoted father and took an active role coaching his daughters’ soccer teams and spent countless hour schlepping them around the state from tournament to tournament. Kristin and Kim thank their father for his devotion, even if they did a very poor job of thanking him in their teens. Like his mother, father, and Uncle Billie before him, Jim was a talented handyman, artisan, gardener, and wood turner. In retirement, Jim operated online businesses devoted to his wood working, selling vintage vinyl (a shared passion with his son-in-law), and quilting – an homage to his mother. There was almost nothing Jim couldn’t fix, as long as you didn’t mind your dishwasher being unassembled for a few weeks at a time. Jim had the gift of gab. If you live in Port Orchard, you have almost certainly had a conversation with Jim at the gas station or standing in line at the grocery store. Jim would want you to know that you should tip and tip well. He valued hard work and honesty. He was unfailingly kind and a lover of breakfast foods and classic cars. He loathed laziness. He was funny – even if his wife didn’t think so. His children are also funny (their mother disagrees). Above all things, Jim loved his wife, children, grandbabies, Skittles, and the Seahawks. He would encourage you to tell cancer to go eff it itself and to enjoy a Corona on his behalf (ideally while cruising somewhere in Mexico). He would welcome if you told an inappropriate joke in his honor or listened to Crosby, Stills, Nash & Young (AND Young!). Jim was not overly sentimental and he found most of his spiritual guidance in the aisles of Home Depot. He would encourage you to do the same. He would tell you to mourn less and to spend more time learning a new skill, or fixing that leaky sink. Jim is preceded in death by his parents, Cecil and Vera Roberts, his sister, Helen Roberts Frank, his faithful dog, Ricky Rufus Roberts, and two grand-dogs, Chloe Barks Ruggles Roberts and Spencer Benjamin Curtiss. He is survived by his wife, Monica, sisters Patricia Dopps and Jeri Neuharth, children Tony Watson, Shona Watson-Styner, Kristin Roberts, Kimberlee Curtiss, and their partners, four grandchildren (Nicole, Elias, Jonah, and Parker), and one great-grandchild (Remington). In lieu of flowers, donations can be made to Disabled American Veterans (DAV), Fred Hutchinson Cancer Research Center, or the National FFA Foundation. If you don’t feel passionate about any of these charities, Jim would encourage you to give to a local kid’s sport fundraiser, but to give generously and from the heart. He would tell you to grow your own damn flowers (dahlias, ideally, which will never look as good as his).

Donald &#8220;Jim&#8221; James Roberts passed away January 12, 2020, in the loving arms of his family. He died of complications from multifocal glioblastoma. His fight with cancer was mercifully and mercilessly short. A memorial will be held... View Obituary & Service Information

The family of Donald James Roberts created this Life Tributes page to make it easy to share your memories.