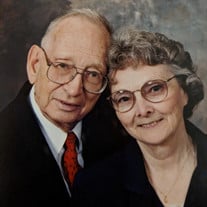 Donna Marie Marvin Davis, age 88, returned to her Heavenly Father on Saturday, July 14, 2018, in a loving community at Orchard Pointe Memory Care, surrounded by her family. She was born in Klipson Beach, Washington to Clair "Bob" Levere Marvin and Angeline Ruby Marvin. She was the oldest of their three children. Donna graduated from South Kitsap High School. She married the love of her life, John Perry Davis, on October 15, 1949. They resided in Richmond, WA; Kennewick, WA; Sinclair, Wyoming; and Provo, UT before settling in Olalla, Washington. She and John had 8 beautiful children and their door was always open to anyone in need of a warm meal or a warm bed. Donna was a devoted member of the Church of Jesus Christ of Latter-day Saints. She spent much of her time researching her genealogy and sharing stories of her family history with her children and grandchildren. She loved seashells and gathered a beautiful collection from around the world, including Guam, where they lived for a time. Donna was preceded in death by her parents Clair and Angie Marvin, her husband John Davis, her brother Robert Clair Marvin, and her grandson William Paul Charles Simpson. Donna is survived by her brother James Allen Marvin, her children: Stevan Scott Davis, Gale Marie, Susan Lee Davis, Michael Wayne Davis, Mary "Lyn" Sherilyn Patterson, Lawrence David Davis, Tina Marie Davis and April Edde, as well as 24 grandchildren, 43 great-grandchildren and 1 great-great-grandchild. Donna will be remembered as a bright, shining light to many as she and John have left a beautiful legacy. A private family viewing will be held at 10 am July 28th followed by an 11 am service at Rill Chapel, 1151 Mitchel Ave, Port Orchard, WA, 98366. Flowers are welcome. Memorial contributions may be made to an Alzheimer’s charity of your choice or to the LDS Family History Center.

The family of Donna Marie Davis created this Life Tributes page to make it easy to share your memories.